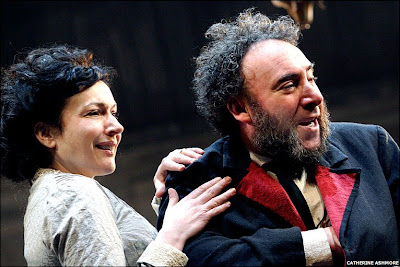 Lucy Cohu and Antony Sher in "An Enemy of the People"
Sheffield has two great theatres. There's the Victorian splendour of The Lyceum with its traditional proscenium arch and balconies and there's the concrete nineteen sixties' Crucible with its big thrust stage. That building also accommodates a more intimate studio theatre. The Crucible, famous for the World Snooker Finals which are held there every spring, has been closed in recent months for refurbishment. The first major production after the makeover has been Henrik Ibsen's "An Enemy of the People", reworded by Christopher Hampton.
I took a semester long course on Ibsen at university and when I visited Norway six years ago, I made sure that I included his hometown of Skien in my itinerary. The country house he bought during a time of bankruptcy is situated a couple of miles north of the town. It overlooks a shallow green and peaceful valley with apple trees in its garden. The citizens of Skien thought enough of their most famous son to erect a statue in his memory and the house is now a seasonal museum. 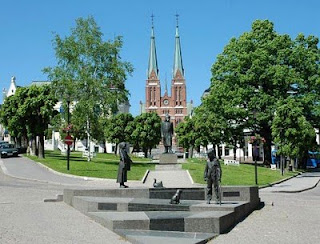 Skien in Norway with Ibsen's statue in the centre.
Written in 1882, "An Enemy of The People" focuses upon Dr Tomas Stockmann. In The Crucible production his part was played quite brilliantly by Sir Antony Sher. Stockmann is a man against the world but motivated by selfless intentions. He has discovered that the town's water supplies have been polluted by local industries and is especially concerned about the new spa baths that are expected to bring in hundreds of tourists and boost the town's ailing economy. But because of greedy self-interests, nobody in authority will listen and he is ostracised by his community. At the very end of the play, in painful isolation he says "...the strongest man in the world is he who stands most alone."
It's not only the environmental reference that gives this play its modern relevance. There's also the issue of how thinking individuals operate within established social structures. Rocking the boat, even for eminently justifiable reasons, is frequently viewed with outright hostility. Stockmann speaks out against the "majority" and claims that fools are perpetually in control. These fools break his windows with small stones which he gathers in a heap.
I hadn't been to see any live theatre in quite a while and I must say that I did enjoy this production. With Antony Sher at the helm, it was as if the rest of the cast upped their game. However, I thought Lucy Cohu as Mrs Stockmann was too young for the role - she looked little older than her daughter Pietra and should have been a more careworn, matriarchal presence upon the stage.
Regarding the theatre's makeover, it seemed essentially the same as before - just spruced up. I was puzzled as to why it has been pretty much closed for a year and how even after that year and an expenditure of £15m the finishing touches "to do" list still has a way to go. 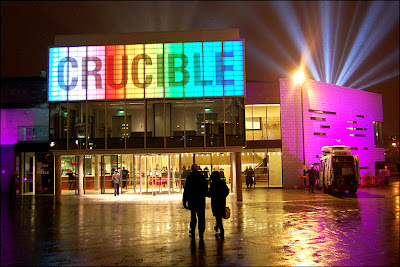