The "geograph" project receives hundreds of  new amateur photographs of the British Isles every day. There's a weekly competition which ultimately leads to a decision about the "Photograph of the Year". Between May 18th and 24th, 6396 eligible photographs were considered for the Week 21 competitition. A shortlist was drawn up and the judge - winner from the previous week - was left to pick his/her particular favourite. And guess what - he picked mine! 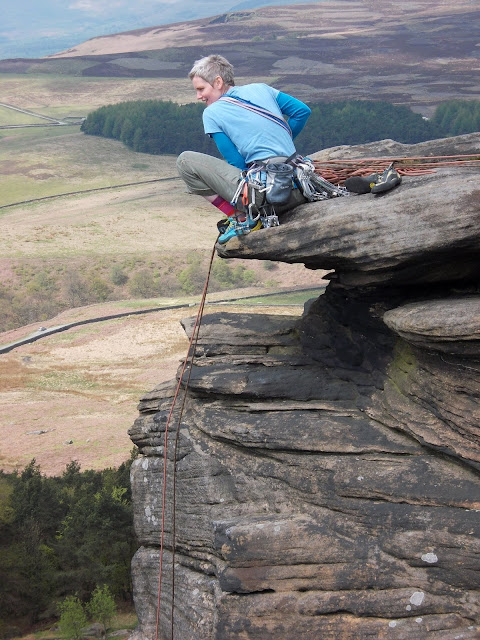 I know I have shown you this picture before but here it is again. It was taken on Stanage Edge - an exposed mile of millstone grit which looks westwards to the Hope Valley and beyond. This wasn't a picture I had much time to compose. I just noticed that confident rock climber having fun, crouching on the jutting rock, calling to her companion below.

Perhaps recalling his younger days, this is what another geograph-er called "Silver Whiskers" said of my winning photo:-

A lovely picture!!! Quite apart from the top class composition, just look at her face! Doesn't that just illustrate how wonderful it feels to be up there doing it. Gingerwhiskers remembers, back in the old days ....... well I rarely did more than a scramble when not on a rope ... but just doing the odd v-diff while watching friends on more severe tasks - it was great to be out. Aaaaaahhh!

Okay, okay I know I am blowing my own trumpet in this post but like a kid with his first bicycle, I feel right chuffed! It's been a long time since I  was last a weekly winner in spite of numerous nominations and if you saw the other candidates I think you'd be right chuffed too!
- June 05, 2013