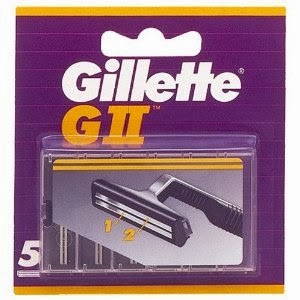 One of the downsides of manliness is shaving. Of course, I could be an idle and unkempt so-and-so - like certain male visitors to this blog - and sport a piratical beard but for the majority of my adult life I have chosen to be smooth-faced.

Because testosterone pulses through my blood vessels like electricity, I have to shave every morning. Usually I do this while standing in the shower, holding a shaving mirror. For years I used Gillette's GII twin blade razor blades. They were much better than disposable razors and didn't have the annoying extra of a so-called "lubricating strip". Whoever dreamed up that addition needs shooting.

I don't know exactly when GII razor blades disappeared from our shops and supermarkets but around ten years ago, needing a new supply, I discovered I couldn't get hold of them. They had gone - vanished! Since then, whenever I have travelled abroad I have looked out for GII blades - from Malaysia to Marrakech - but there are no GII blades anywhere. Okay there's GII Plus and a range of other fancy razor blades sold at extortionate prices, but no GII.

One of the really good things about GII was that the blades lasted and lasted - staying sharp for a hell of a long time. And that's important if you want to avoid post-shaving soreness or even painful nicks. What I suspect happened is that Gillette recognised the longevity of their GII blades and realised that that very longevity was a hindrance to profits so overnight they withdrew them - all around the globe.

Anyway, last October, I spotted that an e-bay seller based in Singapore had some original GII blades for sale so I ordered two packs for just £10 in total - including international deliivery, They arrived at the start of November. Shirley scowled at me non-plussed as I danced around the house - delighted to meet up with my old shaving pals again.

The next morning, I put a GII blade in my razor and commenced shaving with it. Ahhh! A lovely feeling. But what is perhaps more significant is that this morning - January 27th - almost three months later - I have not had to replace that first GII blade! It is still as sharp as ever. With any other razor blade I would have had to replace it weeks ago.

I have nine GII blades left. If I can make a blade last for say four months then the supply I bought from Singapore should last me three years. That's less than one British penny per shave. In the meantime, if any Gillette spies happen upon this page could I urge you to bring GII back! I will be happy to star in a GII TV commercial for you. I step out of the shower and wink at the camera as my showering companion, a twenty year old Swedish beach volleyball player (female) called Olga runs her fingers tenderly over my cheeks and whispers huskily, "As smooth as a baby's bottom!"
- January 27, 2014