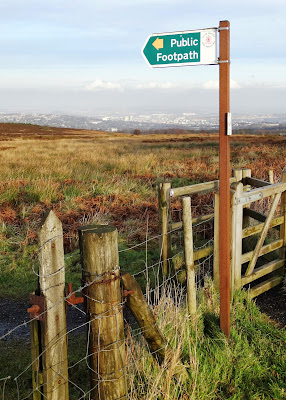 West of Sheffield, Ringinglow Road ascends the nearby moors, linking my adopted city with The Hope Valley in Derbyshire. I can start walking from our front door and be on wild moorland within half an hour. It's something that Londoners can only dream of - having such natural, barely-tamed wilderness right on your doorstep. By car it only takes five minutes.

In the top picture, taken this afternoon, I have just pulled in to the roadside near Lady Canning Plantation. Look beyond the footpath sign and you can see Sheffield nestled in the valley where the River Don meets the Sheaf, the Porter and the other tiny rivers that flow eastwards from the hills.

Then I took my camera, rested on that second fencepost for stability and zoomed down to the valley to get this shot of the city centre:- 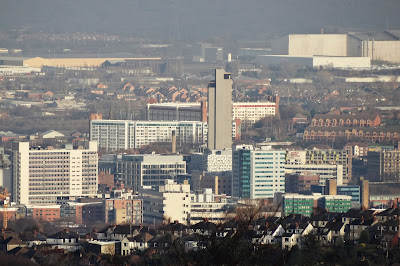 I was almost six miles away. The taller building in the centre is  St Paul's Tower - a modern residential development completed in 2010. Why not click on the pictures to enlarge?


For those who don't know, Sheffield is a northern English city with a population of half a million. During the nineteenth century, it grew from rather insignificant origins to become the bustling centre of steel-making in Great Britain. In international terms, Sheffield has two great claims to fame. It was here that stainless steel was invented and it was here that the game of football was truly born. The city boasts the world's two oldest teams - Sheffield FC and Hallam FC and also the world's oldest football ground - Sandygate - the continuous home of Hallam FC.


And it is now home to the Yorkshire Pudding Photographic Studios - specialising in funerals or pre-funeral albums for your loved ones - Leave a little of yourself behind... Special rates for bloggers.
- January 14, 2014