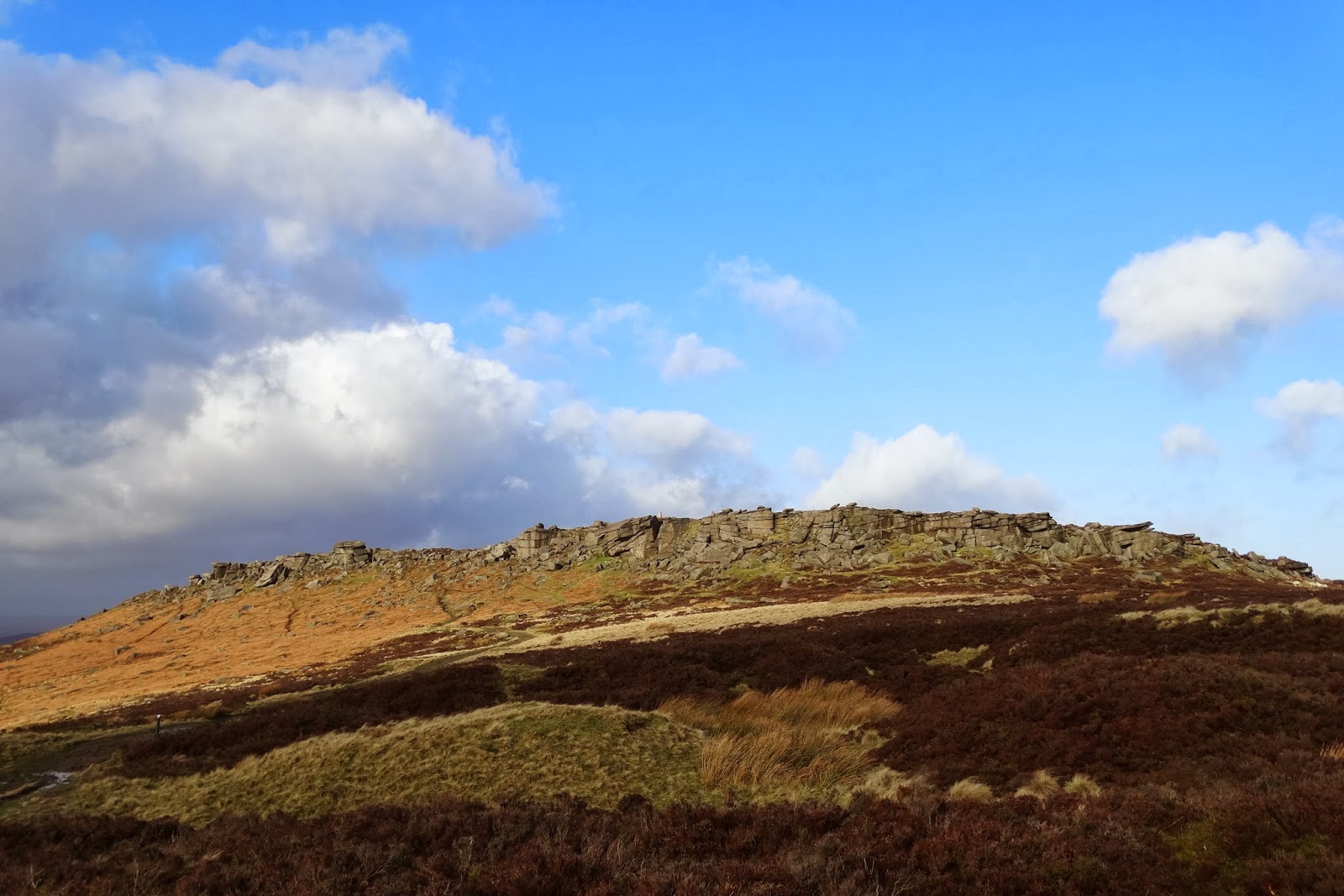 Above you can see the south end of Stanage Edge - a millstone escarpment that runs two miles northwards. It's just  three miles from our house. Nowadays Stanage is a magnet for ramblers and would-be rock climbers but in the eighteenth and nineteenth centuries it attracted quarrymen and stone masons who saw much potential in the millstone grit - especially for the manufacture of millstones of varying sizes. These were used both in the milling of grain and in metal finishing industries.

I remember the very first time I came across some abandoned millstones. Nobody had told me that such artefacts were to be found out in the hills of  northern Derbyshire. It fair took my breath away. Immediately, I imagined the hard labour of the masons and the great difficulties there would have been in transporting millstones for many miles - via horse and cart. And why had they been abandoned? When you know where to look there are numerous millstone sites to explore but the one at the south end of Stanage Edge is the best known.

Here a blue sky and sunshine make this millstone picture look as if it was taken in high summer but it was three days ago in late January:- 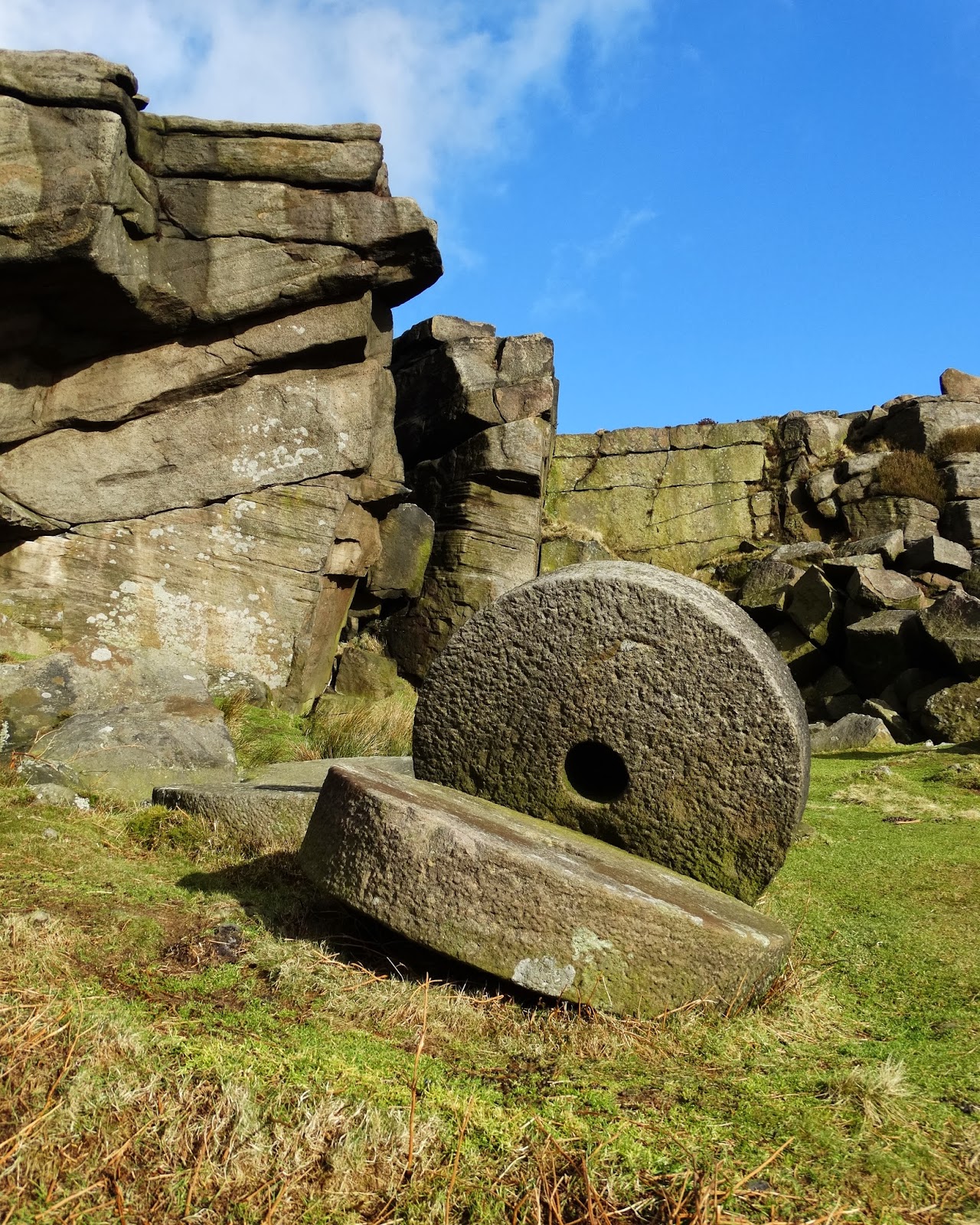 Then ten minutes later a dark winter squall is beginning to sweep in from the west and I am sheltering beneath an overhang. You can still see the same millstones to the left. 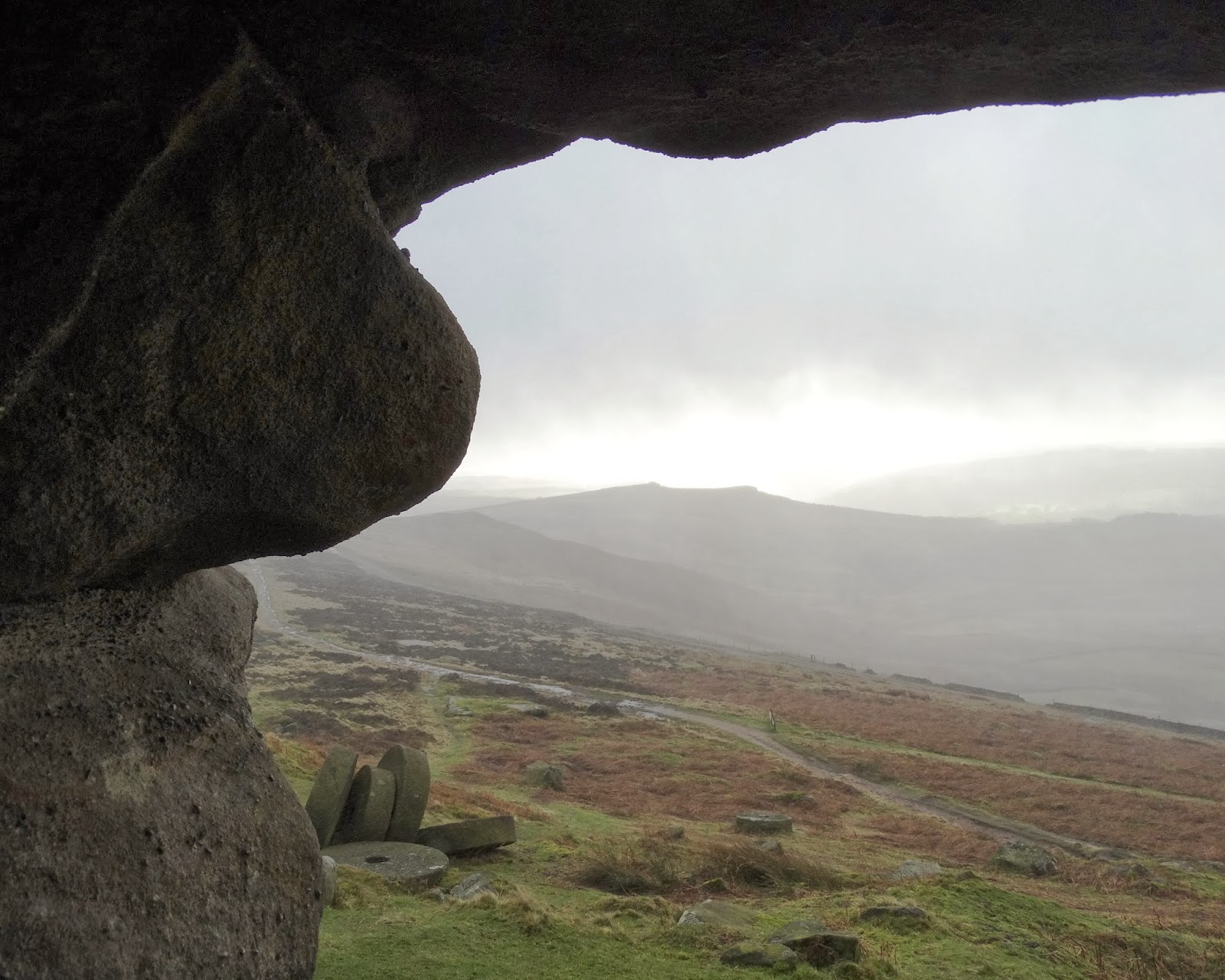 From my shelter I look out across the Hope Valley as sleet and snow blows towards me. 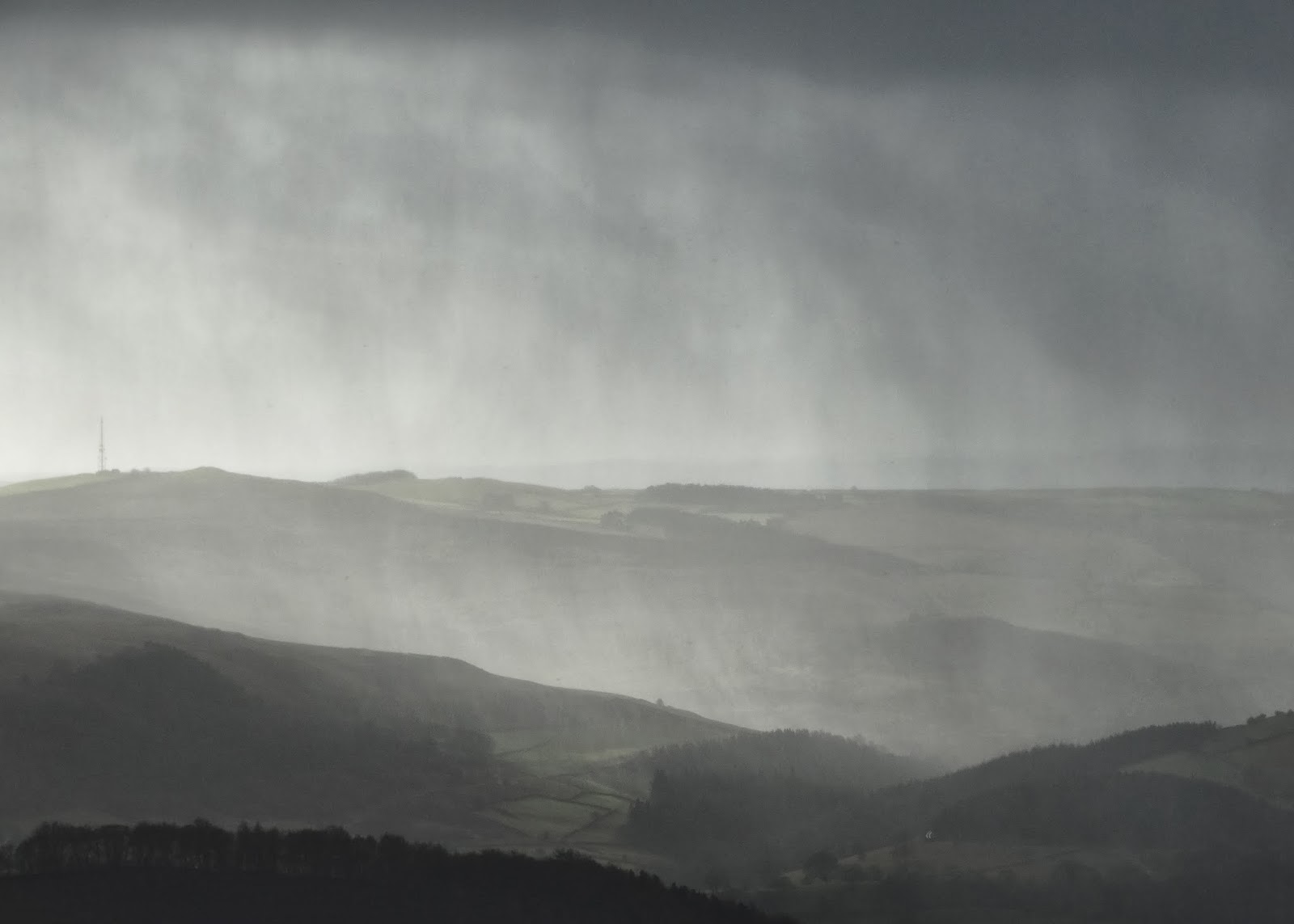 But soon the brief winter storm has passed and sunshine is once again illuminating the millstones that look for all the world as if they were carefully grouped together by a sculptor. 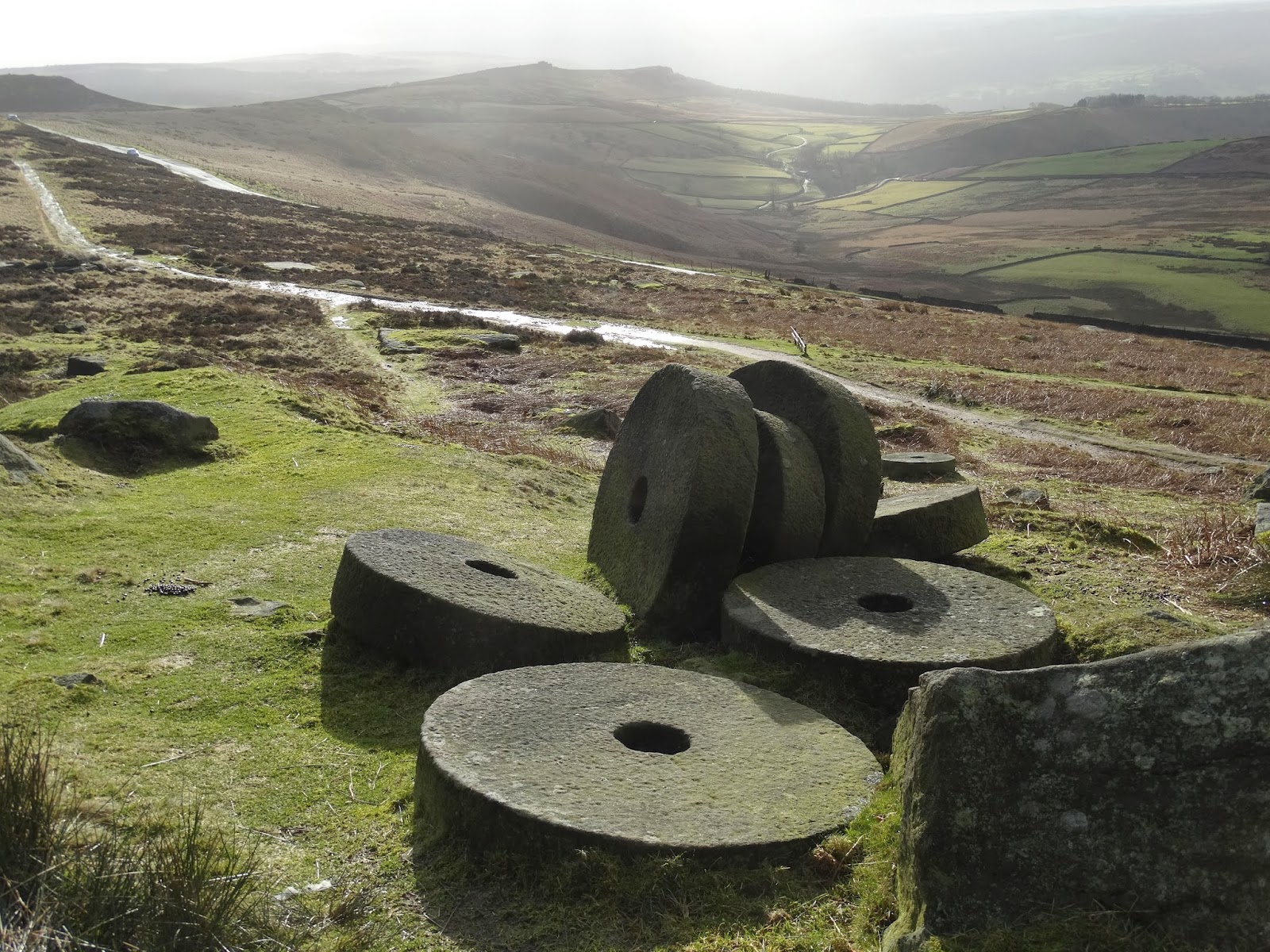 I scramble up onto the edge and walk a mile or more northwards. There are no other walkers around apart from a lone woman of senior years. We pause for a brief, windswept conversation, agreeing on the invigorating attraction of winter walking. So often when I see single women walking, they avert their eyes and won't even reciprocate my friendly "hellos" - as if they expect every man they come across to be a sexual predator. But this lady was relaxed about sharing a few words with me - alone on The Edge.

Then I cut down through Stanage Plantation where the sound of a chainsaw cut through the sighing winter wind. Along the lanes back towards my parked car and as I looked down on Overstones Farm, I noticed darkening sky and another storm sweeping over the Hope Valley. It would soon be upon me. 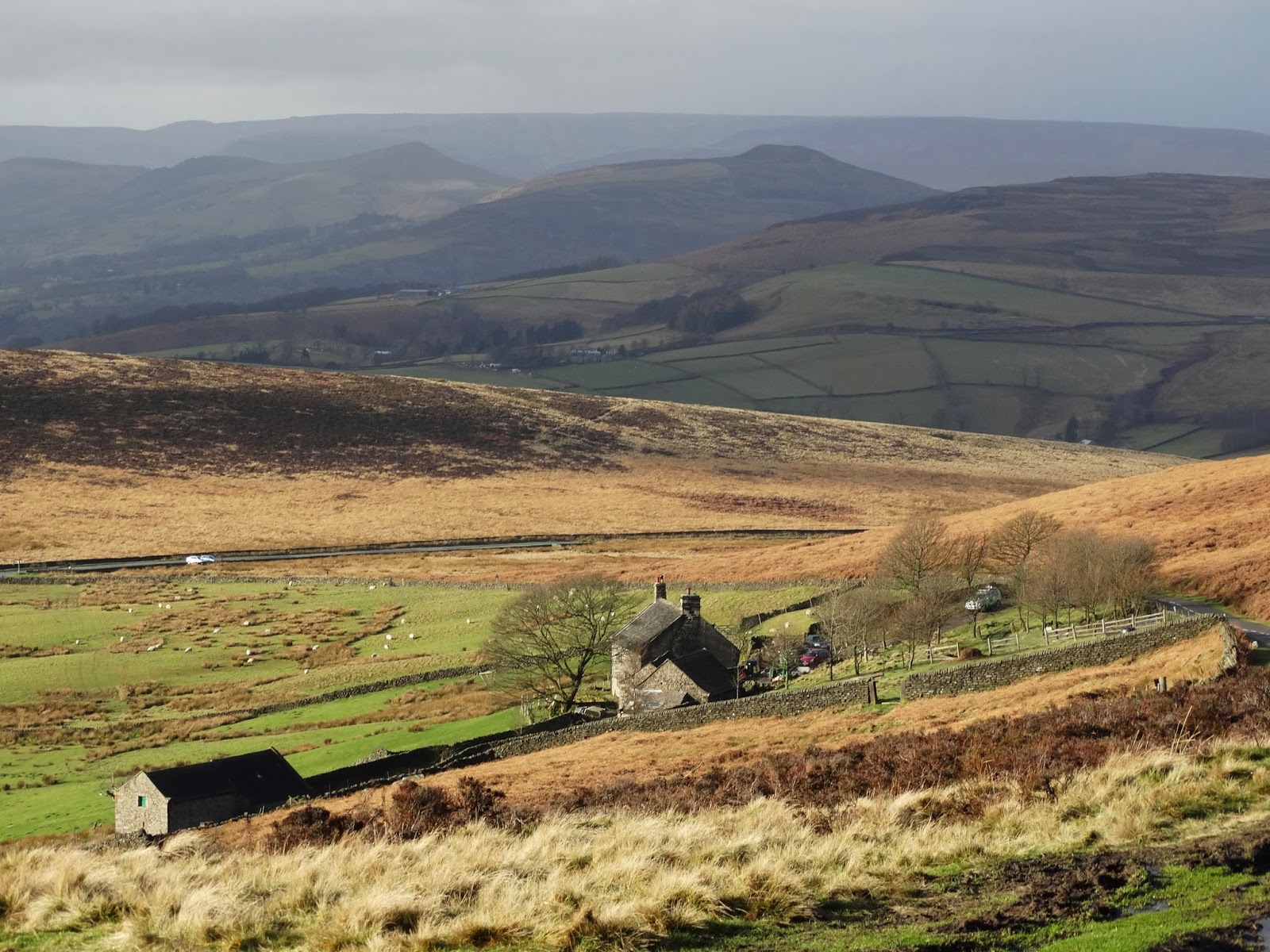