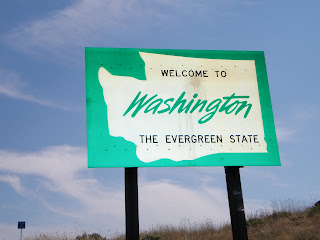 Closer to Friday June 6th. All being well, that's when Shirley and I will be jetting to North America for a fortnight's holiday. I have planned it all and fingers-crossed everything will go swimmingly - but of course, you never know. I have carefully tailored several successful holidays in the past twenty years. We don't need travel agents any more - not with the internet grinding away in our study. In the past everything has always gone like clockwork.

We will fly from an obscure Lancashire village called Manchester all the way to Vancouver in Canada. Three nights there in a downtown  apartment. On one of the days there, we will drive up to Whistler for some whistling before moving on to Victoria on Vancouver Island.

Next we will take the ferry over to Washington State where I have booked a week's car hire. Working out insurance for this has been nightmarish because quoted car hire fees in the USA no longer appear to include basic Collision Damage Waiver insurance. In the end, I decided to get insured over here in England and shall fend off the aggressive salesmanship I expect to encounter at the Budget desk in Port Angeles.

From Port Angeles to Ocean Shores - then to Olympia - then to Portland, Oregon - then to Goldendale - then to Ellensburg before three nights in a studio apartment in a private house in Seattle. Then across Puget Sound and back to Port Angeles. Leave the car - ferry back to Victoria and the next morning bus and ferry combo back to Vancouver Airport for the long flight back to Ringway - now known as Manchester International.

It will be an adventure - especially if we are chased by bears, caught up in one of those shopping mall shootings they have in America or get to witness Mount St Helens exploding once more. Shirley and I are both unashamed Americophiles and it is a good while since we were there. Was it really the spring of 2005... California, Las Vegas, The Grand Canyon, The Sequoia National Forest? Nine years ago. How time flies. Unfortunately, we won't be calling in on Mr and Mrs R. Brague in salubrious Canton or checking out Ms Blawat's infamous Sloughhouse hippy commune. They're both too far away.

O beautiful for spacious skies,
For amber waves of grain,
For purple mountain majesties
Above the fruited plain!
America! America!
God shed his grace on thee
And crown thy good with brotherhood
From sea to shining sea!

Addendum: To any blogging burglars out there - if you imagine that our designer mansion is going to be left empty for two weeks you are utterly wrong. I have hired two security guards from my favourite "Lidl" supermarket and they are going to take it in turns to patrol the hallowed corridors of Pudding Towers. They have my full permission to utilise any of the various weapons we display on our walls - including my Great Uncle Walter's blunderbuss. So you enter at your peril! Be warned!