Yesterday was lovely. A sapphire blue sky with only the occasional cotton wool cloud and springtime's new growth  illuminated by a fiery orb that is thankfully 93 million miles from our planet. I was walking south of Chesterfield, having parked up by the disused methodist church in the village of Alton.

After a mile or two I found myself in the middle of a field of bright yellow rapeseed. It stood almost as tall as me and the public footpath which traversed that hillside was almost hidden by the yellowness:- 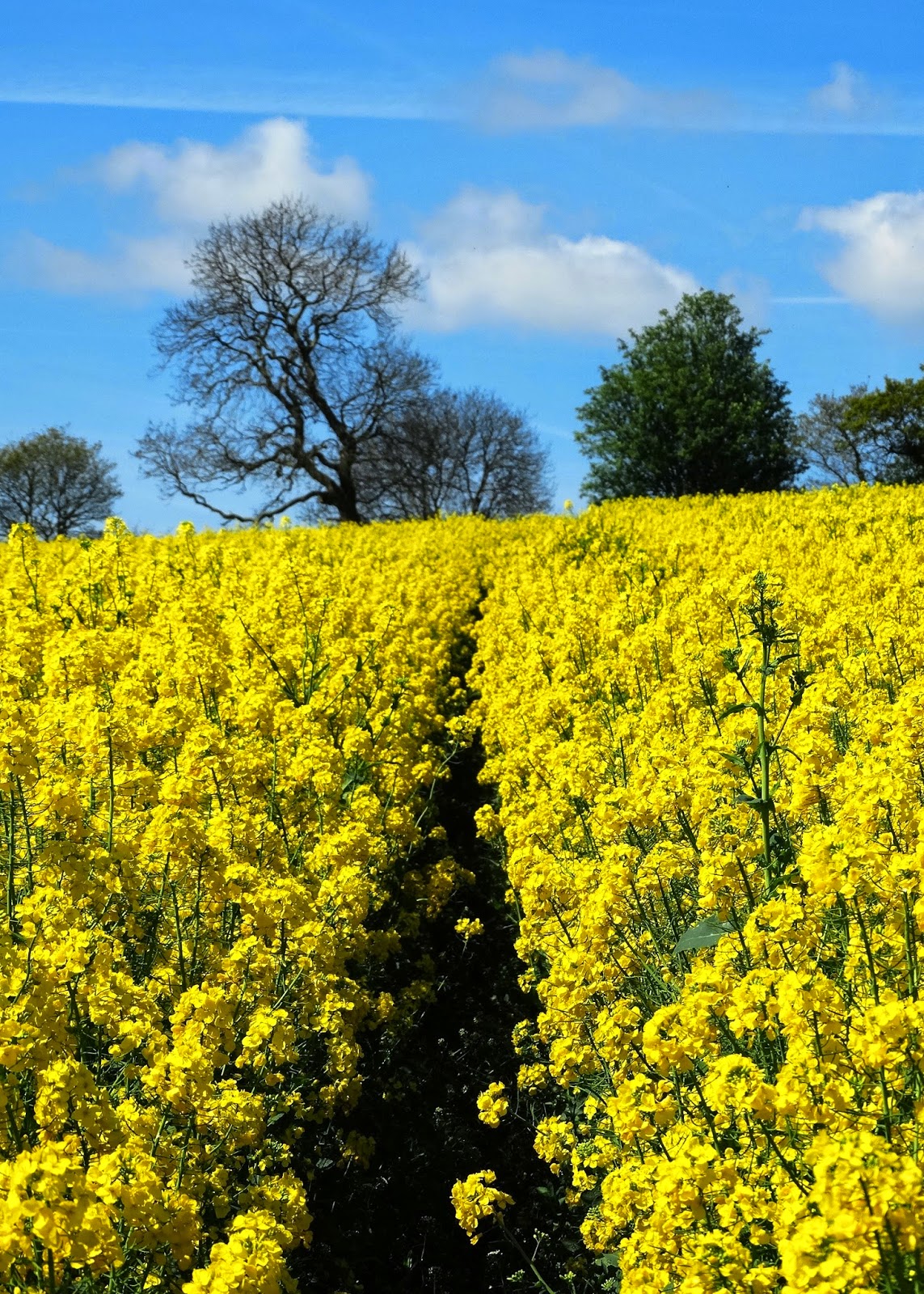 At Holmgate, I asked an old lady where the path was. I could see it on my map. She pointed to an ancient stone stile by the edge of her extensive lawns. We stood and jawed for a while and she was one of those people that I could have comfortably conversed with for hours. We were like a pair of shoes. She was in her late eighties. She said something like this - "When you are young you waste time. You squander it. You've got to live each day - make the most of your life so that you end your days with few regrets". She was envious of my walking route in the spring sunshine and sad that she would never again enjoy such a self-propelled journey. Arthritic pain was in her eyes as well as her bones.
By Stocksmoor Farm I saw a bench under an old oak tree. Carved into the top board were these words - "What is this life if full of care we have no time to sit and stare". Not "stand" but "sit". And there was also a little brass plaque with - rather oddly - a blogspot address:  http://nicksbench.blogspot.co.uk. This wasn't a memorial bench as such but a rather attractive way of marking a fiftieth birthday that passed in 2012 - Nick Luft's birthday in fact.
More beautiful bluebells in woods then along by Redcar Hillside to Bole Hill. Down to the valley and to the gates of Press Manor. Somewhere amidst its stonework a vicious Jack Russell must have caught my scent or heard my footsteps on the gravel. It came sprinting like Billy Whizz, barking aggressively, completely ignoring my "good boys". I was over a stile into the adjacent field but still this little Hitler advanced. I was tempted to boot him in the air like a canine football but then I heard The Lord of the Manor behind the hedge - "Come here Rufus!" and reluctantly the betoothed mini-wolf retreated. I was saved...but so was Rufus! 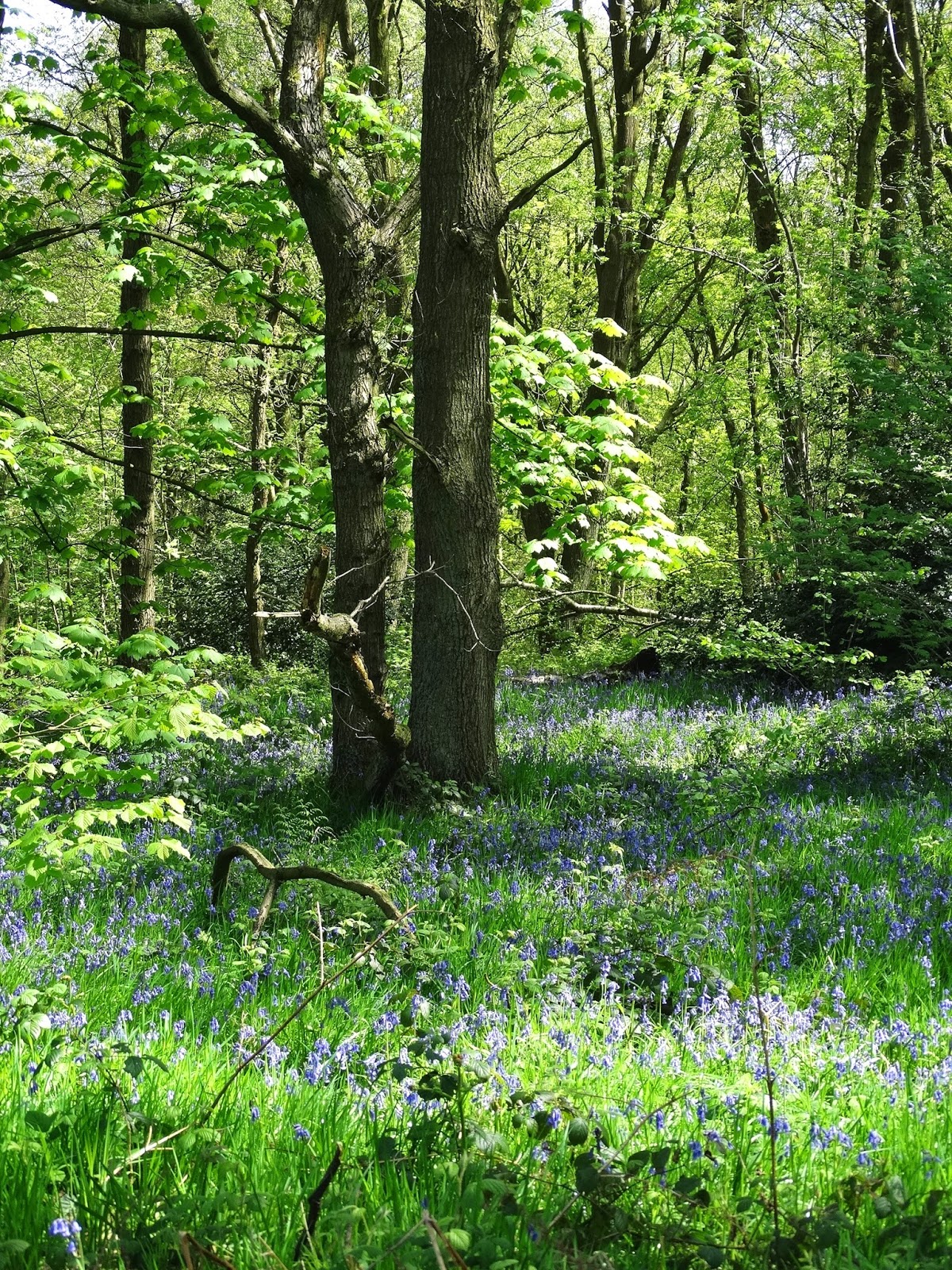 Down to Press Reservoirs and through Northedge Hall Farm, passing a long-abandoned stone quarry on the way back to Alton where I spotted two manageable stone lintels in the nettles by my car. They had surely been left there long ago when the old church had been a stone mason's shed for a period of time. I weighed up the morality of the situation and then heaved them into the boot (American: trunk) pledging to give them a new life as edging stones in our garden. They were very grateful to be out of that nettle bed - lying forlorn by the side of the road for years. But now they are rescued.
- May 04, 2014