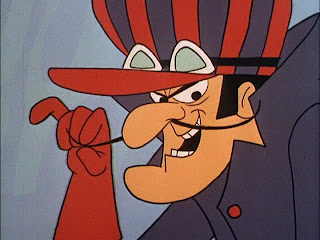 A true story from ten years back...

It is early summertime. I am tootling home from work. Knowing all the back roads, I avoid the city's evening traffic and as usual turn into Carr Road which leads up the hill to Walkley. There's a car coming down the hill - a silver Audi. Suddenly I have to brake hard because the Audi - instead of waiting for me to pass -  is doing a U-turn right in front of me. He pulls into a parking space and I honk my horn as I proceed up the hill.

I look in the mirror and the Audi is coming back up the hill. Instinctively, I know straightaway that I am being pursued. A quick left onto South Road and then a quick right up steeply inclining Greenhow Street. My suspicion is right. He is following me and I know exactly why. It is because I dared to show disapproval by honking my horn.

Along Bole Hill Lane to Bole Hill which is on the very edge of the city. I see the stony-faced driver behind the wheel and I see a mirror image of his registration plate - WAD 7. Living in Sheffield's suburbs there is a famous former England international footballer called Chris Waddle and his cars have always been easily spotted because they also have the personalised registration "WAD" but the guy behind the wheel of the Audi is certainly not Chris Waddle. If it had been him I could have asked for his autograph.

It crosses my mind that I could pull into the side of the road and see what my pursuer wants. "I say old chap - I do believe you are following me. Might I ask what your problem is old fruit?" But weighing it up that is a scenario I am keen to avoid. I don't know this man. He might have a weapon in the car. He might be younger and fitter than me. Even more of a thug! Besides - anybody arrogant enough to make such a thoughtless U-turn in the street thence to commence an angry car chase simply because a car horn has been pressed briefly in displeasure is not somebody you really want to tangle with.

From Hagg Hill to Stephen Lane and on to Crosspool. He is still in pursuit. Sometimes I have to stop at road junctions but he doesn't ram me or jump out of his car to hammer on my window. Perhaps he is also apprehensive - for it occurs to me that he also doesn't know the character of the other driver.

What can I do? What can I do? My heart is beating like Ginger Baker's bass drum  and I am shaky too. As I turn into Fulwood Road, an idea hatches that I will lead my pursuer to the police station yard at Woodseats. Once in the yard, I will again press my car horn but this time continuously until a copper comes outside to see what all the fuss is about. Yes. That's the best that Mr Cowardy Custard can up with.

Down the back of Endcliffe Park, along Rustlings Road. He has been pursuing me for five miles or so. Up the hill along Ecclesall Road and through the traffic lights at the top. There'a a big truck in front of us in the left hand lane. I speed in front of it and turn hard into Brincliffe Edge Road. My pursuer has to slow down to let the truck pass by and as I zoom down Bannerdale Road at fifty miles an hour I see him far behind me. Quick right into Glenorchy Road then quick right again and then screech into a random house's driveway, parking behind the tall conifer hedge.

I wait for perhaps ten minutes, my rapid heartbeat subsiding, the shaking ceasing. Then I travel back home up the hill - still on the lookout for WAD 7 but I have done it! I have lost him! And I didn't need to reach Woodseats Police Station either.

I phone up the cops but the porcine respondent is totally disinterested. He tells me - to my amazement - that no crime has been committed. I can almost hear him yawning at the other end. I give him the pursuer's registration number and I suppose the copper may think I am jesting - trying to nail Chris Waddle just for a laugh or something. Waddle played for Sheffield Wednesday. Maybe he thinks I am a mischievous Sheffield United fan. If that call were made today, I would insist on a complaint number and would take the matter to a higher level but back then, if I am honest, I was just glad to have escaped my pursuer.

It hadn't been at all like one of those car chases you see on the television. It was somehow scarier than that. One evening, the following September, WAD 7 was parked on Carr Road. Mysteriously and no doubt surreptitiously, it  had a potato shoved firmly into its shiny chrome exhaust pipe.
- May 14, 2014