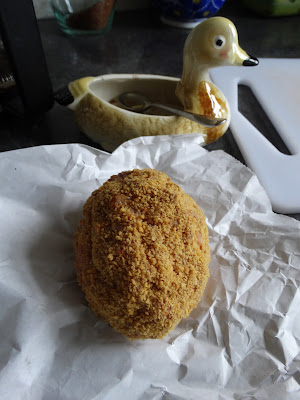 What is that sitting on the kitchen worktop at Pudding Towers? Lord Pudding just popped into "The Banner Crust" to buy it. Is it a ginger coated chocolate bonbon? Is it a battered cricket ball? Is it a red kangaroo turd? Or is it a castrated camel's left testicle?

No my friends it is a superb example of a scotch egg. It cost his lordship ninety nice pence and he consumed it yesterday lunchtime.

It is sometimes said that the scotch egg was invented in a posh London grocery store called "Fortnum and Mason" in 1738 but long before then, in the cuisine of the Moghul Empire, there was a strikingly similar food item called narcissus kofta. It consisted of a hard boiled egg encased in a meat kofta shell. By 1738, the tentacles (not testicles) of the mighty British Empire had certainly reached far into the old Asian territories of the Moghuls so it is very possible that the idea was brought back to the motherland.

Various readers of this blogpost will be aware that scotch eggs can be highly addictive. Over in the exclusive retirement village of Trelawnyd, North Wales one particular resident is regularly seen stumbling from door to door with a baying pack of guide dogs, his eyes bloodshot, his swollen tongue hanging out, desperately pleading "Have you got a spare scotch egg?" Once a respected member of the nursing profession this poor trembly fellow, whose name has been withheld for legal reasons, is now a shadow of his former self.

Dressed in vomit stained cargo trousers with a great split in the crotch, old Homer Simpson carpet slippers and a stained "Walking Dead" T-shirt, he is a sorry sight to behold. He hasn't shaved in years, his eyesight is going and his lank hair is dishevelled. That is what happens with scotch egg addiction. First your money goes and then your self-respect.

Being of tough Yorkshire stock, I am determined to keep my fondness for scotch eggs in check. A weak character can easily lead users down the path to dependency as in the case cited above and I am well aware of that danger. However, scotch eggs have well-proven aphrodisiacal qualities and can bring other health benefits  too such as extra walking stamina, improved memory and improved memory. On balance, I calculate it is a risk worth taking.

Here's that same scotch egg cut in half. Notice how in this example there is no gap between the egg and the sausage meat casing for such a gap is characteristic of an inferior product - such as scotch eggs sold at petrol stations or at shops across Lancashire:- 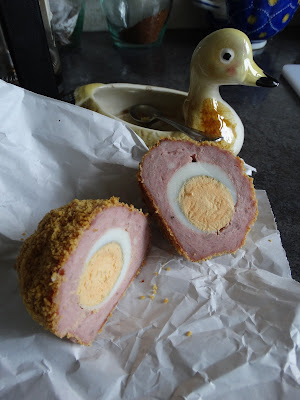