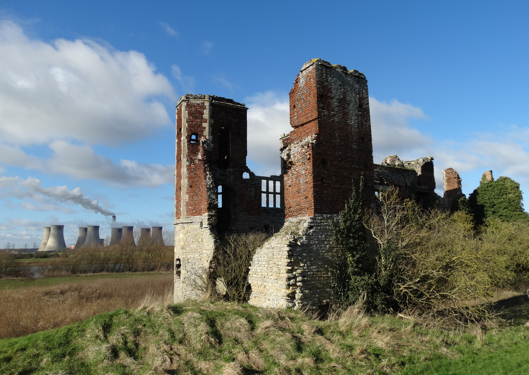 On my little adventure at the start of this week, I took a break from driving with a short stop in the village of Torksey. Somewhere I had never been before. It is situated on the Lincolnshire side of The River Trent, not far from its junction with  the manmade Fosse Dyke that begins its Roman route in the city of Lincoln.

The sky above was as blue as cobalt with cotton wool clouds gently scudding south. Sunshine illuminated the old  village church theatrically and so I photographed it before deciphering some of the churchyard's weathered gravestones - farmers and farmers' wives, babies, a boatman and a soldier - all gone before us. Perhaps to life everlasting.

Then as I walked on towards "The Hume Arms" pub, I noticed a building beyond windbreaking trees to my right. It aroused my curiosity but how could I reach it? Soon, wading across a knee-deep carpet of ivy, I stumbled to the river bank until there it was in all its ruinous glory - Torksey Castle. Largely destroyed by a royalist assault in the English Civil War, it has been crumbling away ever since that fateful day back in 1645.

It sits on private land and was never really a castle - more of a country house. Being so close to the river, its foundations have frequently been flooded. Some historians have suggested that it occupies the site of a Saxon stronghold and maybe that is how it earned the nomen "castle". A mile to the west of it, Cottam Power Station still belches its fumes into the country air, providing a stark visual and historical contrast.

I love places like Torksey Castle. Redolent of times past. Neglected and yet beautifully evocative. In a way I am happier to witness such a structure crumbling down than to see it surrounded by scaffolding and men in hard hats. After all, nothing lasts forever. 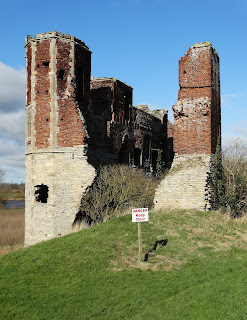 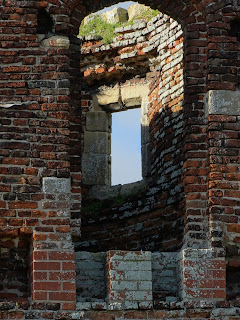