Mary, Mary, quite contrary,
How does your garden grow?
With silver bells, and cockle shells,
And pretty maids all in a row.


In the sixteenth century, Mary Queen of Scots spent the last eighteen years of her life "imprisoned" at several locations in England. Politically and religiously she was deemed to be a threat to the English throne. I put the word "imprisoned" inside inverted commas because hers was a rather odd sort of imprisonment. Not for her a dark cell with bars and a drunken jailer rattling his keys. No. For Mary, there were hunting parties, an entourage of servants, banquets and trysts with noblemen. There was, it seems,  little actual suffering until her head was chopped off at Fotheringay Castle in 1587. She was forty four years old. 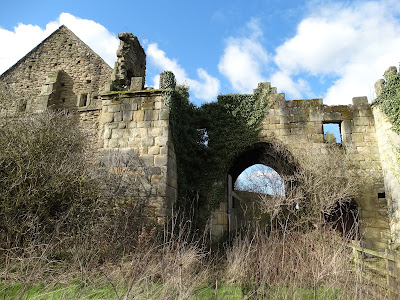 For most of her many years of "imprisonment" she was under the stewardship of The Earl of Shrewsbury. Fabulously wealthy, The Earl effectively owned several important properties including Sheffield's lost medieval castle, Sheffield Manor and a massive manor house located some twenty four miles south just outside a Derbyshire village called South Wingfield. 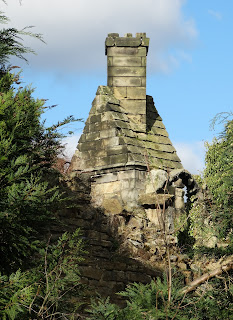 Strategically located, the palatial manor was constructed in the middle of the fifteenth century for Lord Cromwell, The Treasurer of England on the site of a Norman Castle.

Two hundred years later, in the middle of the seventeenth century, Wingfield Manor was ruined during The English Civil War and no one has occupied it since but a farm - called unsurprisingly Manor Farm - was built within the old manor house's grounds. Today the ruins and the working farm complex mingle together.

Public visits to Wingfield Manor are strictly controlled by English Heritage. I have a sense that the current landowners and the occupiers of the farm have been resistant to pressures to improve access. But it is a part of our country's heritage and to me it is a crying shame that visitors are kept away by warning notices - "Private", "No Entry", "No Public Access" etcetera. The ruins also deserve proper maintenance.

When I walked by the ruins on Thursday, I was only able to snap a few external shots that hint at what lies within. As I returned to South Wingfield in the late afternoon, the daylight was becoming gloomy but looking across a sheep pasture I think you get a sense of just how monumental Wingfield Manor was. An intriguing place from where a troubled queen once looked out and heard crows cawing in the oak wood below... 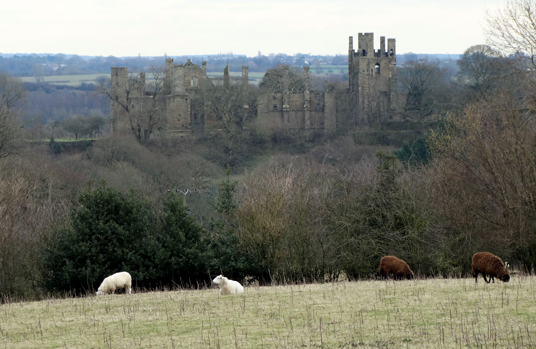