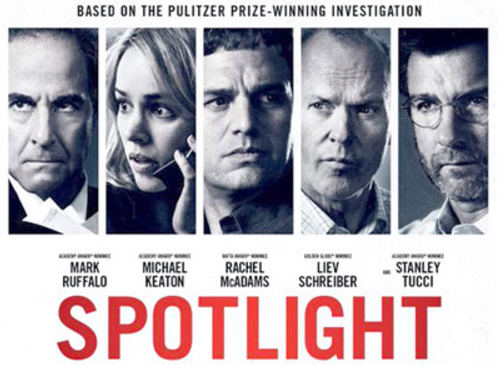 Set in Boston USA fifteen years ago, this film focuses upon the work of an investigative team  at "The Boston Globe". They had the onerous and complex task of shining their spotlight upon The Roman Catholic church - not just the eighty seven priests the team had identified as serial child abusers but also upon the church as an organisation  - an organisation that cynically and repeatedly tried to bury the truth about sexual abuse of children by priests in the Boston archdiocese.

It's not an easy film to follow. It's fast-moving and the way the investigation develops is not always clearly spelt out. You really have to concentrate just as the team of dedicated reporters had to concentrate upon the difficult task at hand. There's no love interest or sensational depictions of past abuse. Instead, the screenplay is measured, educative and serious - befitting the subject matter.

If I was going to single out a particular performance for praise, it would have to be Mark Ruffalo's portrayal of Michael Rezendes. In pursuing the truth, he was like a dog with a bone but that pursuit was coloured with compassion, anger, frustration and occasional disbelief. These were the same feelings that touched the rest of the Spotlight team.
___________________________________

So that was the film but what about the subject matter?

It is mind-boggling that so many men of the cloth used their positions to prey upon vulnerable boys and girls. They used a range of cunning psychological devices to keep those children quiet and even to instil in them feelings of guilt about the sordid activities they had been drawn into. Of course, this didn't just happen in Boston.

There were abusive Catholic priests all over the world and even today we have no guarantee that similar abuse isn't happening. Ministering to communities should surely be all about kindness and other decent Christian  values. The priests who manipulated children to achieve sexual relief ruined so many lives. They also brought shame and suspicion upon righteous priests  who were always in the majority.

It is chilling to recognise that the litany of child abuse was well-known to the Catholic hierarchy. It was in files and correspondence but rather than confront the horror they chose to sweep it under the carpet. Guilty priests were moved on to new parishes or sent to other countries where their vile. abuse simply continued.

How must it be to reach adulthood with dark memories of being sexually abused? Thankfully I have no idea because it never happened to me but I can imagine that it is a terrible burden to bear and guess that there are no magic wands or psychotherapy sessions that could ever make the nightmare go away. My heart goes out to all the victims - thousands of them over countless years.
- February 04, 2016