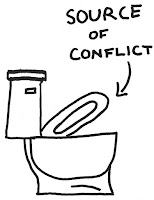 British toilet bowls have seats. When a woman visits the toilet to urinate, she needs the seat to be down. In contrast, men need the seat up. In toilets that are used by both sexes, men often need to lift the seat and women often need to put it down.

I have heard women cite failure to put the seat down as one of the most irritating failings of the male gender. For example, on Friday, when I was working at the Oxfam shop, I overheard one of the women workers suggesting that a note should be put up in the newly refurbished unisex toilet urging male volunteers to remember to put the seat down. She was being serious! I have heard identical sentiments being expressed on both TV and radio - sometimes jokingly but always with an underlying sense of mild outrage. Oh these awful men - how dare they leave the seat up!

I just don't get it. To begin with - what the hell does it matter? And secondly, why aren't we men complaining about women who leave the seat down? How thoughtless of them - we men need the seat up thank you very much! It works both ways and if a note does go up in the Oxfam toilet I may be tempted to put a second note alongside it - "Dear Lady Volunteers - Please remember to put the seat up after use. Thank you. Have a nice day!"
- April 17, 2016