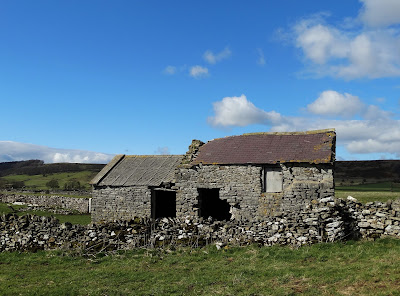 Tootling along the lane from Foolow to Eyam, I spotted a tumbledown limestone building to the left. A hundred yards further along the lane there was a pull-in where I could park my sleek new silver chariot. Then I walked back with camera in hand.

Just as I reached the gateway to the beautifully decrepit building, a muddy old Nissan 4x4 vehicle pulled up and a fellow climbed out. "What are you doing?" he asked.

"Oh, just taking a picture of that building over there."

Lord, I wish that I had a photograph of that man. We chatted for twenty minutes or so, standing at that gateway. Within thirty seconds of meeting him, he said, "Are you from Hull?"

Now I left Hull and East Yorkshire at the age of eighteen. I have lived in Sheffield since 1978. But this fellow could hear something in my voice. I was astounded and I told him so. "You have got a good ear sir!"

"Don't bloody call me sir! I'm just an ignorant farmer. I can't even read and write. I'm not a bloody sir!"

It was as if he had been to a fancy dress shop and asked for an authentic farmer's outfit. He wore muddy wellington boots, an old padded tartan shirt and a khaki-coloured army jacket which had seen much better days. On his gnarled and ruddy eighty year old head he wore a navy blue "Thinsulate" beanie hat that was dotted with pieces of chaff and seeds.
He pointed to his farm at Shepherd's Park and said that he had lived there all his life. In fact, he owned the tumbledown building I had spotted and said that it had once been a humble lead miner's cottage. "Go inside if you want. There's an old fireplace in there. The part on the left was put on years later."

He said he had no television and of course as he couldn't read, no computer. I asked him how he spent his spare time and he said that he didn't have any. "I just work and that's it.". And he told me about driving HGV's up and down the country to supplement his sheep farming income. He also told me about the accident he'd had in the summer of 2014 when a massive hay bale tumbled upon him causing injuries that put him in hospital for three months. "They treated me like a king."

He showed me his hands. They were like leather gloves - calloused and worn with white lines where the creases are. They were the living evidence of a lifetime of manual work and they made mine look like the hands of a mincing dandy in a royal palace.

Oh and another thing about this man. He told me that he is a millionaire and I can well believe it. So much land and a substantial house that alone would fetch more than half a million pounds if sold on the open market.

If only I had been brave enough to get a photograph of him. He was part of the landscape. We waved to each other when we finally parted. I tramped, with his permission to the tumbledown building as he went back to his admirably illiterate life of labour.