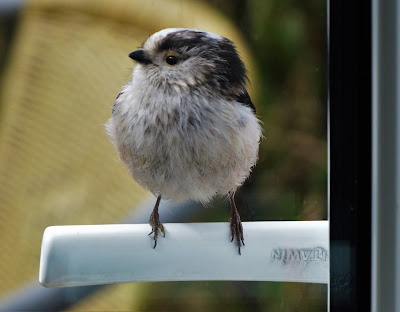 Who's that tapping on our French windows? Why, it's Billy the long tailed tit!

Throughout the past week this little bird has often  been at our dining room windows, briefly resting on the door handles or flying up and repeatedly attacking the glass like a miniature kamikaze pilot. Then he flies off to the hedge or feeding station but soon returns. Over and over.

Research has thrown up a few possible explanations but I am mostly drawn to the idea that Billy thinks he is attacking a potential rival in the mating game. Of course what he sees as a competitor is only his reflection.

Long-tailed tits are characterful little birds. In the last few years we have often seen them in our garden but this is the first time we have observed the window tapping phenomenon. You would think that Billy might injure himself but the RSPB (Royal Society for the Protection of Birds) website reassures us that he will come to no harm before he moves on to frantic nest building activity and, fingers crossed, parenthood. 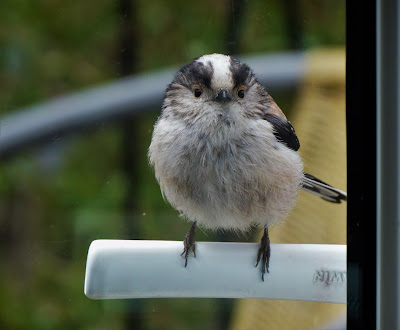