Huddersfield is one of England's largest towns. It was the birthplace of rugby league and in the early nineteenth century a hotbed of industrial unrest. Here the so-called "Luddites" rose up against powerful millowners whose new technology in the woollen industry was putting men and women out of work, resigning them to destitution.

I was up there  yesterday for a football match - the Yorkshire derby match between Huddersfield Town and Hull City. Before the game, I had lunch in "Herbert's" bar  after a nice stroll around the town centre.

Huddersfield railway station is a magnificent mid-nineteenth century structure, built in a classical style. It looks out over the plain expanse of St George's Square where in 1999 a statue was unveiled of one of Yorkshire's most influential sons - Harold Wilson.

Born and educated in Huddersfield, Wilson was the leader of our Labour Party and prime minister in two spells - 1964 to 1970 and 1974 to 1976. He led our country through the most swinging period of the sixties and was a true moderniser. One of his greatest achievements was to launch The Open University that gave so many more people access to higher education. It is easy to be cynical about politics and politicians but looking back I would say that Harold Wilson was this country's greatest leader since World War II. It is fitting that he should have such a prominent statue in his home town. 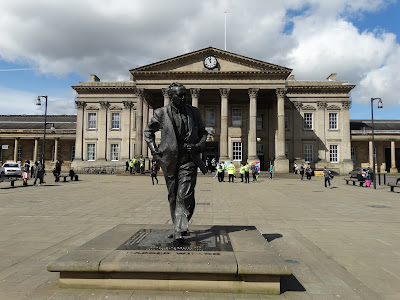 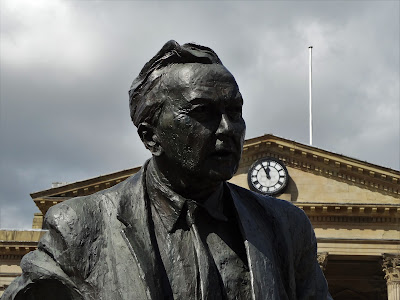 Wilson supported Huddersfield Town F.C. and if he had been at The John Smith's Stadium yesterday he would have jumped out of his seat in the fortieth and ninetieth minutes when his team scored. Fortunately, two of our lads - Hernandez and Diomande - also managed to get the ball in the net and the game finished 2-2.

On the way home, I took Clint down the M1 motorway for the first time. He seemed to enjoy the experience for he purred like a tiger as I listened to the endless football chatter on Radio 5 Live.
- April 10, 2016