"How may I live without my name? I have given you my
soul; leave me my name!" - John Proctor in "The Crucible"

For years I have been fascinated by the names that people choose to give to their children. It is something I have blogged about before. As a schoolteacher over some thirty six years, I witnessed changing fashions in naming. Some of the new names seemed quite horrid to me, often drawn from the world of celebrity or television. I felt even more sorry for girls who had been saddled with names like  Kylie or Madonna than I felt for boys called Cary or Shane.

My beloved daughter's boyfriend's father is a vicar. He is one of the governors at our local primary school. Scanning through the names of pupils currently on roll, he discovered that there was not one biblical name. To me this was a rather shocking discovery. No James or Peter or Thomas or John or Simon or Benjamin or Jacob - not even a Goliath or a Judas! And amongst the girls no Mary or Rebecca or Sara or Ruth or Eve - not even a Jezabel or a Zipporah (wife of Moses).

Three young couples we know have recently become parents for the first time. The babies are all boys and they are called Charles, Evan and Jasper. All three names earned nods of approval from me. They are not silly, frivolous names but solid names to be borne proudly through life. 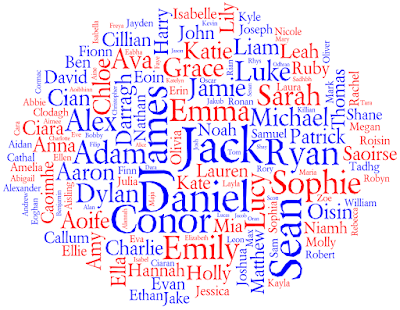 I think my own parents did fine calling their four sons Paul, Robin, Neil and Simon. We always liked our names and grew into them like favourite old jackets. And when Shirley and I picked names for our two children we wanted individuality without unusualness so we came up with Ian Philip and Frances Emily. Ian wears his name like an old jacket too but in the past Frances sometimes doubted our choice because it is frequently confused with the male version - Francis. Happily, she is much more comfortable with it now.

Spelling can be an issue with names. Lord knows why some parents insist on strange spellings. Take Matthew for example. To me it should always have a double "t" in the middle but these days a lot are registered with a single "t". Why?

One name and its variants that used to really bug me in school classrooms was Keeley - or was it Keilly or Keally or Keelee or Keyleigh or Kayleigh or Kelly. Why the hell they couldn't just stick to one spelling of the awful name? I am sure that half the time it was to do with semi-literate parents turning up at the register office with only vague notions of how their new babies' names should be spelt.

When choosing names, different parents seek different things. Some want solidity. Others want modernity while yet others want uniqueness. To me they should always pause for a while and remember that the helpless babies in their cots will grow up and travel through life and in 99.9% of cases the names they are allotted will remain with them through the years, becoming part of their identity and how other people view them.
- April 13, 2016