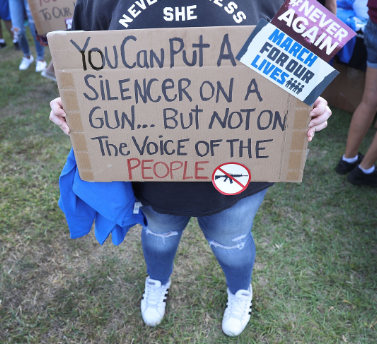 How utterly marvellous that so many young Americans joined the "March for our Lives" protests yesterday. Take that you NRA nitwits and bigots!

The young people who came out in their thousands are not used to socio-political demonstrations but their mass involvement has echoes of days gone by when western youth led protests against Vietnam, nuclear weapons, South African apartheid, racism and unemployment for example.

Cynics on the sidelines might say that protests change nothing but they are wrong. Look at what the suffragettes did, look at what The Chartists did, look at all the historical improvements to workers' pay and condition, look at the downfall of apartheid. Protests are not just colourful days out with banners and megaphones. They really can turn the tide.

And with regard to guns, random killings and mass shootings, America really does need to change. It is time for politicians to stop listening to the conservative gun lobby with their specious arguments and deep pockets and instead pay attention to the people - the normally silent majority.