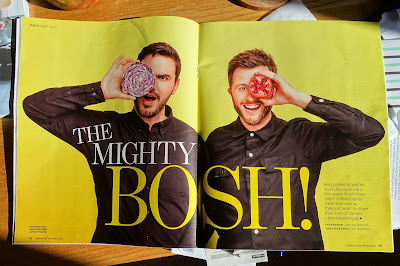 "The Mail on Sunday" is not a newspaper we would ever normally purchase but we bought a copy yesterday at the behest of our son Ian. I headed straight for the "You" magazine within. Flicking through the pages, I soon found "The Mighty Bosh!" article and chuckled away as I read it. It is for example funny to see one's son described as a "hipster".


It was a long, positive article by a journalist called Judith Woods and there were also a couple of recipes from the forthcoming "Bosh!" Cookbook.

Now this is where the surreal bit comes in. As I was reading the article, I was called into our dining room by Lady P. She had the radio on and was listening to the Michael Ball Show on Radio 2. "Ian's on the radio!" she yelled. 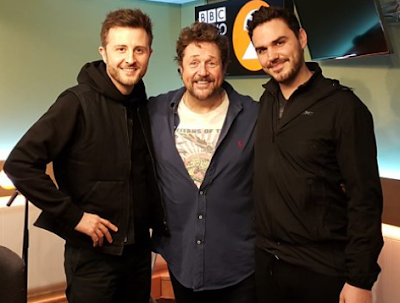 I put down the article I had been reading about "Bosh!" to listen to Ian and his "Bosh!" colleague (American: co-worker) being interviewed at some length by Michael Ball who is a well-known English singer, recording artiste and entertainer. Ball was also a good interviewer. He showed genuine interest in veganism and his questions were open and encouraging. 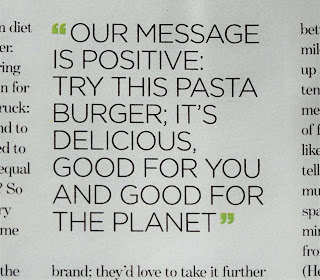 Ian and Henry are getting better at dealing with this kind of situation. Shirley and I were a little taken aback when Ball asked them what they hoped the next step might be and Henry replied, "A TV show". But who knows? Perhaps it will happen. Meat and dairy-free diets are very current. People are interested. During the interview, Henry said, "Even Ian's dad is flexitarian now".

Anyway, I returned to the magazine article, resisting any temptation to turn on the television  set - just in case our son's face appeared there to give me a surreality overdose.
- March 26, 2018