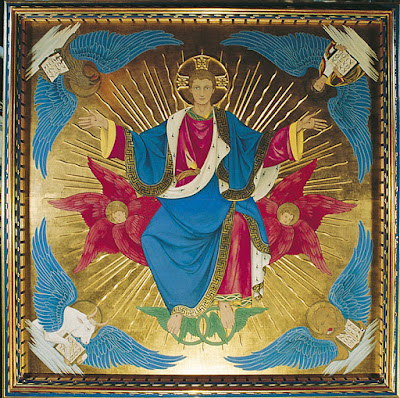 Let's all cheer and raise a glass. It's March 20th - St Cuthbert's Day!

In my humble opinion, St Cuthbert should be the patron saint of England and not the foreigner - St George who had as much to do with England as I have to do with Timbuktu.

St Cuthbert was a holy man who helped the poor and lived a blameless life. He was probably born in 634 AD and died on March 20th 687 AD. His tomb is the centrepiece of Durham Cathedral though at first his remains rested on the holy  island of Lindisfarne off the Northumberland coast where he was the prior of the abbey in the last three years of his life.

When Danes and Vikings attacked the east coast of England in the ninth century, the monks of Lindisfarne exhumed Cuthbert's remains and carried him to safety. He seemed to represent the very heart of northern England and his coffin went on a long journey - resting in a variety of locations around the old kingdom of Northumbria of which Yorkshire is the major part. I have been to just a handful of the churches where St Cuthbert rested and all of those churches are named after him.

There are many stories surrounding Cuthbert including tales of miracles. When the Scandinavian threat diminished his remains were brought to Durham and for centuries his tomb became a place of pilgrimage.

I am not a religious person but most countries seem to have patron saints who come to act as symbols of a nation's character. Somewhere along the line, for reasons that are lost in the mists of history, England picked the wrong patron saint in my judgement. It should have been our own homegrown saint, a man who lived amongst us, a man of peace and hope. Happy St Cuthbert's Day Everybody! Happy St Cuthbert's Day!
- March 20, 2018