It was Shirley's birthday today. I bought her some new walking boots, a summer dress, a nice bottle of New Zealand sauvignon blanc, some Cadbury's mini chocolate eggs and  a colourful bunch of Gerbera daisies but still she wanted more! She had the idea of visiting the coast - seventy miles from Sheffield so at 10am we set off.

Clint was purring as we headed east along the M180. At first we decided to head south of Cleethorpes in the direction of Donna Nook which is a coastal nature reserve famed for its seal population in the autumn but by March the seals have all left along with their new pups. Here land and sea threaten to merge and at low tide you might imagine that you could walk across The North Sea to The Netherlands.
After an hour we were back in Clint and made a short stop at Marshchapel on our way back up the coast  to Cleethorpes. We had a nice stroll around the town before reaching our lunch destination - Steel's fish and chip restaurant. It was an establishment that Shirley's late parents - Charlie and Winnie - would occasionally visit and a traditional eatery that has won many plaudits. 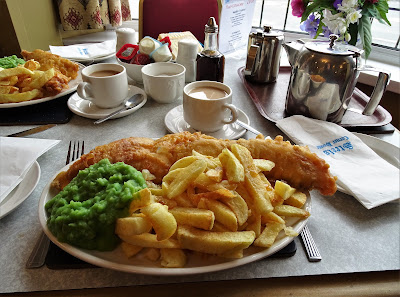 Battered haddock with chips and mushy peas, a pot of tea and some bread and butter - you can't beat it and we also had a window seat overlooking Market Street, watching all the comings and goings. A  small funeral party emerged from The Market Tavern - some holding purple balloons - as senior citizens with small cars manoeuvred with difficulty out of tight parking spaces.

Later we went in a seafront amusement arcade and frittered away a tub of two pence pieces on one of those coin drop machines - trying to push other two pence pieces over the moving ledge inside the glass. I have always enjoyed losing money in those frustrating contraptions.

By the time we had strolled a few hundred yards along the beach, it was after four o'clock and the birthday girl decided it was time to head home. It had been a nice day out in brightening weather and a pleasant sway to mark my wife's 59th year in this world.
- March 23, 2018