Earlier today, Steve at "Shadows and Light" posted a snowy photo of Liverpool Street Station in London. That snow keeps falling down - endlessly. Though Steve had snapped the original picture a few years back, it had been lifted and animated by Google. Steve played no part in the enhancement nor the selection.
The same happened with some of my pictures. I snapped the photographs five years ago and soon afterwards Google got a hold of them and kind of processed them into a short but fast-moving slide show. The images go by pretty quickly and I have no means of slowing them down nor restoring their original colour and sharpness.
The pictures flash by. The black and white one shows  a snowy scene in our garden in the winter of 2016. And there are those swans we saw in the boating lake behind Colchester Castle in Essex. The herd of cows are resting in the shadow of Hardwick Hall in the summer 0f 2015. This was the original image:- 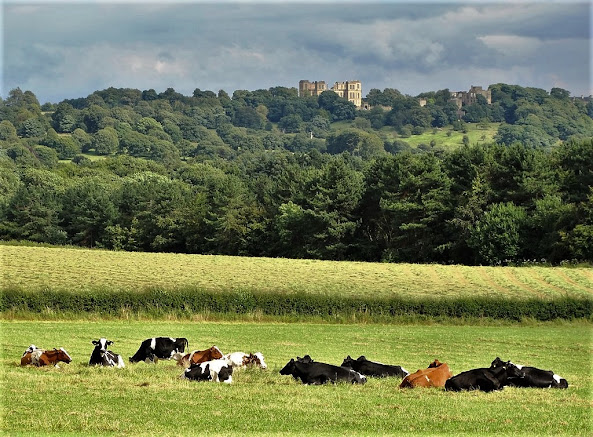 Google don't seem to provide this unrequested service any more. Maybe it was just an experiment.
I still bewail the loss of Panoramio which was hosted by Google. They pulled the plug on it in  2016. I had contributed to this worldwide photo site for almost ten years, carefully geo-locating  multiple images I had collected during my travels around the world.
There was nothing that I nor the thousands of other Panoramio contributors could do to prevent the site's disappearance. Could the same happen to Blogger in the future?  I hope not but it is possible. After all, nothing lasts forever and if Google ever determine that their blog hosting service has run its course or become too costly or technically too problematic then Blogger could go in heartbeat, taking with it everybody's blogposts. They have become precious evidence of the lives we bloggers have been living through recent years but in the end there would be no vote, no debate. They would just go without even a puff of smoke.
- December 06, 2021