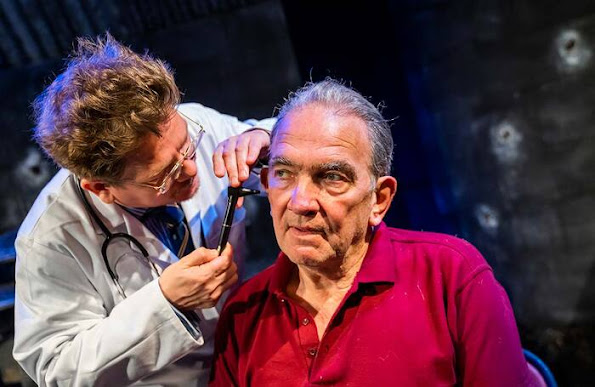 The principal reason that Shirley and I were down in London was to see a play produced by our Ian's girlfriend - Sarah. The venue was The Finborough Theatre  - a small drama space above a pub in affluent west London.

The play had the curious title, "Yes So I Said Yes" and it was written by the Northern Irish playwright and actor - David Ireland. This is the first time it has had a run outside Northern Ireland. It is one of three plays that Ireland has written with regard to "The Troubles" - but located in the times that have followed The Good Friday Agreement of 1998.

The central character is Alan "Snuffy" Black who is described simply in the script as "a Protestant". But he is more than that. He was a paramilitary assassin and his mental state is unsteady to say the least. He is a tortured soul and there's something of Shakespeare's King Lear about him as he wrestles with his demons.

It is hard to say what the play is "about". It is not really telling a story and it doesn't contain any strong moral messages. In my opinion it is all rather absurd. I do not mean that in a dismissive way for absurdity can be extremely effective in theatre - take Samuel Becket's best known play as an example - "Nothing happens. Nobody comes. Nobody goes. It's awful..."  - Waiting for Godot.

There are laugh out loud moments of comedy in the show which required a small but capable  ensemble of five actors and an actress. "The Guardian" gave it a four star rating and its visiting critic said this of it:

On the cramped patch of the Finborough stage, director Max Elton marshals a marvellous cast of six with the quick fluidity vital to farce. Go prepared to be appalled and challenged.
Given the controversial nature of this play, I was pleasantly surprised that Shirley came out of the drama space singing its praises. There's something really special about live theatre -  especially in small, intimate venues where there's really no hiding place.
Afterwards, we retreated with Sarah to "The Pembroke" on Old Brompton Road where we met up with our Ian who had been busy all day with "BOSH!" related matters and meetings.
- December 02, 2021