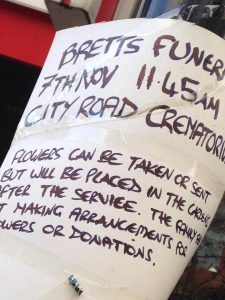 It was nice to say farewell to Bret yesterday morning. His mother and father were there and various family members plus old friends and new - people who had got to know him in the last two years when he ended up begging outside the "Spar" shop on Ecclesall Road.

The funeral was held at City Road Crematorium - a non-religious service presided over by a humanist preacher. As we followed the coffin into the chapel of rest, that song by Eric Clapton was played over the sound system. You probably know the one I mean - "Tears in Heaven" about his four year old son Conor who, like Bret, plunged to his death from a high balcony.

The exact circumstances of Bret's death remain unclear. It may have been an accident, or suicide or murder. Perhaps we will never know.
There were allusions to Bret's intelligence, his mathematical ability and how at the ages of eleven and thirteen he might have taken up a scholarship at Mount St Mary's College - but this would have involved boarding during the week and Bret didn't like that idea. There were of course no tales about how, as a young adult,  he got lost in drugs and ended up homeless on Sheffield's not-so-mean streets. A lot of passers-by spoke with him and supported him in small ways.

The service concluded with another modern song - "Fast Car" by Tracy Chapman. I recall when I acquired her first album, I would play her songs over and over. She was a great discovery. It's nice to know that Bret liked her too:-
You got a fast car
I want a ticket to anywhere
Maybe we make a deal
Maybe together we can get somewhere
Anyplace is better
Starting from zero got nothing to lose
Maybe we'll make something
Me, myself I got nothing to prove.