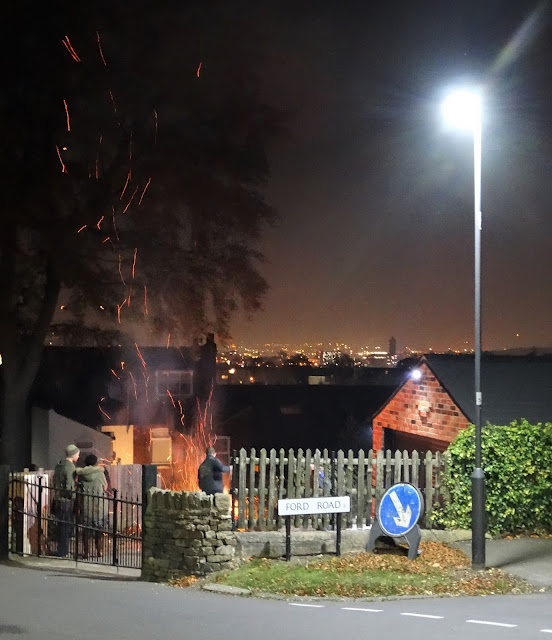 Bonfire Night 2016. Not like the magical Bonfire Nights of my childhood. Shirley was watching "Strictly Come Dancing" on the television. Not my cup of tea. Outside the noise of fireworks suggested that war was breaking out. I grabbed my camera and went out for a wander round our neighbourhood. Rockets burst starlight silver in the cold November sky. Whooshing and the rat-a-tat-tat of bullets echoed round the houses.

Long ago, after my village bonfire in 1960 or 61,  I sat in our kitchen with Dad and Dr Baker - the man who delivered me into this world - eating piping hot baked potatoes from our oven. Was it really fifty five years ago? I am far older than they were then. And in the morning inspecting the still smoking remains of the huge bonfire on the school field, finding empty cardboard tubes that still smelt of gunpowder - airbombs, comets, skyrockets and traffic lights. The morning after the party and another endless twelve months before we could watch dancing tongues of flame leaping up to surround another helpless Guy Fawkes.

This year - on the corner of Dobbin Hill and Ford Road, a small bonfire party was in process under the sycamores where a clamour of rooks constructed their rookery. Two miles away in the valley you can see the lights of Sheffield's city centre and look past the M1 towards Rotherham - Sheffield's little brother.
- November 08, 2016