On the Yorkshire bank of the mighty River Humber there is a village called North Ferriby. I know it quite well. Far across the muddy waters, on the Lincolnshire side, there's a village called South Ferriby. Until yesterday I had never been there though I had seen it from the north bank.

I was on my way to watch Hull City draw with West Bromwich Albion in the English Premier League but I had factored in a midday diversion to have a stroll around South Ferriby. When I got there it was very misty. I couldn't even see The Humber.

I strolled around, up to St Nicholas's church and then along a chalk track that overlooks a massive chalk quarry which was almost invisible to me in the mist. Back in the village, I was hoping to have a drink and a sandwich in "The Nelthorpe Arms" before crossing The Humber Bridge for the match but the pub wouldn't open until 4pm. Instead, I bought a haslet and salad sandwich from the village post office along with a pint of milk. Hull City supporters require plenty of sustenance. 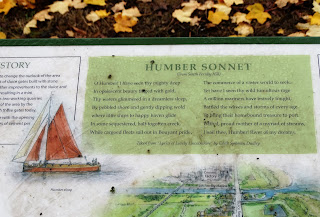 Near the village pond there's an information board which on clear days would look out on the wide expanse of The Humber but yesterday it looked out on a milky-white mistiness. There was a poem included on the information board. I hadn't seen it before so I took a photo of it and have now transcribed it below:-

O Humber! I have seen thy might deep
In opalescent beauty tinged with gold,
Thy waters glimmered in a dreamless sleep
By pebbled shore and gently dipping wold
Where little ships to happy haven glide
In some sequestered, half-forgotten creek
While cargoed fleets sail out in buoyant pride
The commerce of a vaster world to seek.
Yet I have seen thy wild tumultuous rage
A million mariners have bravely fought,
Battled the waves and storms of every age
To bring their homebound treasure to port.
Withal proud mother of a myriad of streams,
I hail thee Humber! River of my dreams

By Edith Spilman Dudley
(from "Lyrics of Lovely Lincolnshire") 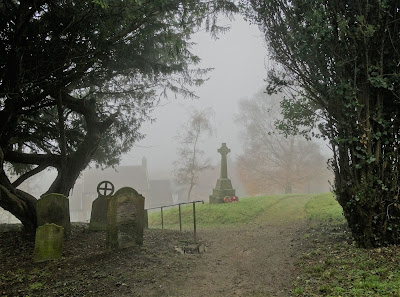