Yesterday rain teemed down in the morning but at midday the grey clouds drifted off to reveal what they had been hiding. A quick check of the local forecast and I was off to the hills again. I decided to do a three mile circular walk mostly on quiet metalled lanes, knowing that several of my usual paths would be sodden and slippery with muddy quagmires in certain familiar places. I am still anxious about my left knee - realising that a fall could set me back. 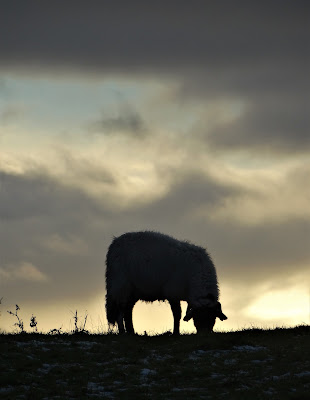 On the walk I saw five people. First, a mature couple in full hiking gear. As they approached I smiled and delivered a hearty "Hello!" but they looked through me and didn't say a word. Perhaps they thought I was an escaped lunatic. I also saw a tall man with a small dog on a lead and he returned my cheery greeting. Then there was an escaped lunatic in a black bobble hat and a green coat plodding on The Long Causeway. I included him in the photograph below as sinking November sunshine expertly illuminated the slopes of Stanage Edge. 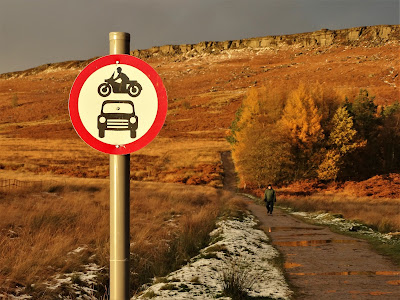 I also encountered a barrel-shaped man with a bushy white beard. In fact, I passed him twice as he was on a clockwise route while I was naturally walking anti-clockwise. The second meeting was on the long ascending driveway that leads to North Lees Hall. I was going up and he was coming down. We exchanged pleasantries but I couldn't pluck up the courage to ask him where he'd parked his sleigh.
Talking about vehicles, I would say that as I plodded those three miles only half a dozen cars passed me by.

The rain held off as promised and I was home by four thirty in the fading light. There had been a dusting of whiteness on the higher moors - the first real snow of the winter. For our evening meal, I prepared a bolognese sauce from scratch - following instructions given to me by my old university chum Paul Palompo over forty years ago. It was a method he himself had been taught by his Italian mother. Regarding the process and recipe, he made me swear an oath of secrecy which I have ne'er broken to this day.
- November 19, 2016