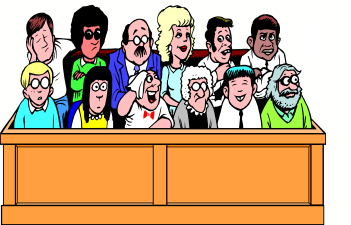 Fourteen years ago, an official-looking brown envelope landed on our doormat. I had been selected for jury service.

It would involve two weeks off work just before Eastertime. To tell you the truth, I was delighted. It meant I would miss a particularly hectic period in the school year. It would be like a little holiday. Hurrah!

On the Monday morning, I turned up at Sheffield Crown Court ready to do my duty. I was led to a spacious waiting room with easy chairs, coffee tables, televisions and a kitchen area. There were twenty other jurors there - a random cross-section of Sheffield's citizenship. Soon, a grey-haired court official arrived to explain to us how the next two weeks might unfold and how some jurors might not be needed at all. My heart sank.

However, later that morning, my name was called and with eleven others I was led to the jury room connected to Court Number One.  A foreman was appointed and we trooped into court. The others swore on The Bible that  they would fulfil their duties honestly and to the best of their ability but I read out the alternative atheist pledge.

Then the lone defendant was led into the court. He was a muscular mixed race fellow aged thirty two with mean black eyes. He gave we twelve jurors several cold stares before the case commenced. The allegation was that he had assaulted a police officer while he was being checked in at a police station following his arrest for other crimes.

Two key pieces of evidence I remember were (a) a photograph of the police officer's swollen mouth and broken front teeth and (b) a photo of the defendant's right fist with red teeth marks upon the knuckles, Still he pleaded not guilty, claiming he had been set upon by policemen at the station and he was just an innocent victim of police brutality. His victim's testimony painted a very different picture. The case unfolded over two and a half days.

Back in the jury room we started to weigh things up but very soon one of the jurors announced that in his view it was all very clear - the police wre to blame and not the defendant. Everybody else protested and then we hunkered down to consider the evidence.

The next morning we reached a majority decision of eleven to one that the defendant was indeed guilty. We returned to the court and informed the judge of our verdict.

It was only then that we discoverd the defendant was already in prison at Leeds for previous violent crimes and that he had a criminal record as long as your arm. The judge added another two years to his sentence.

As the defendant left the court, his mad black eyes scoured the jurors as he yelled that he knew where we lived and warned us to watch our backs - with a few unsavoury expletives thrown in for good measure. I felt like yelling back, "And I know where you live ! In a stinking prison cell. Enjoy it sucker!"

Five years ago, this same unpleasant young man's name appeared in "The Sheffield Star". He had been killed in an underworld revenge shooting. Apparently, drugs and drug money were involved. Unsympathetically, I concluded that the world was probably better off without him. He would be no great loss

And that was the first case of my jury service. It took up most of the first week. Tomorrow - the second week and the second case...
- November 21, 2016