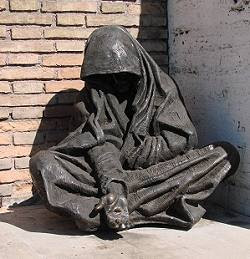 The man with the faraway eyes has gone. Every Wednesday afternoon over the last two years I would see him. Usually, he'd be sitting outside the "Spar" shop on Ecclesall Road but occasionally he'd be outside the NatWest Bank at Hunters Bar.

He had a ginger-brown beard and a woolly hat. He was a beggar and his name was Bret*.

Sometimes I gave him change and once I bought him a sandwich and a drink. For a beggar, he was quite polite - never really hassling people but those faraway eyes told me that he probably had mental health issues. I would say hello and occasionally ask him how he was doing but I didn't want to get too close. After all, where might that lead? Perhaps to somewhere I didn't want to go.

There's a concrete lamp post outside the "Spar" shop, very close to where Bret would sit. In recent days it has been decorated with bunches of flowers and there's a note in a plastic sleeve informing passers-by that Bret's funeral will be at City Road Crematorium next Monday morning. I think I will go.

It has been difficult to find out what happened to Bret - how he died. Rumour has it that he was in a block of flats in  the Sharrow area of the city and was pushed over a balcony or staircase by a woman who was later arrested.  It is all rather hazy.

Some people say horrible, cruel and dismissive things about beggars. You might have heard the tired old remarks they dish out:-
and so on ad nauseam. Talk about man's inhumanity to man!


In my view, every beggar has his or her own unique story. They should never be bunched together or prejudged. Turning your back on beggars makes you no better than the priest and the Levite in the story of The Good Samaritan. We may not be able to right the wrongs in this world but we can show some kindness to beggars.

* On Sheffield Forum, I later discovered that his name was spelt unusually with a single "t". His mother - Dee - also referred to  her son's struggles with drugs. She thanked other Forum visitors who had had kind things to say about Bret.
- November 02, 2016