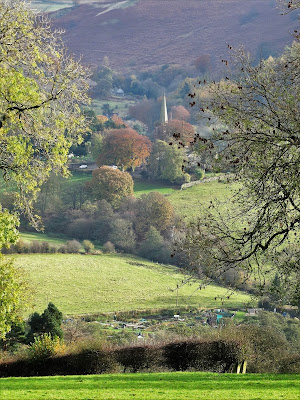 As America prepared to vote Ronald A Chump into The White House, I went walking in the Hood Brook Valley near Hathersage. It was a misty, somewhat overcast autumn day with the sun a blurred milky whiteness behind obstinate clouds. Not the best day for photography in my humble opinion. Above you can see St Michael's Church, Hathersage rising above the trees like a spearhead.

Below two shots inside the old church that was certainly visited by Charlotte Bronte in 1845 when she was in the process of writing "Jane Eyre". She stayed in the adjacent vicarage with her old friend Ellen Nussey and they walked together over the fields to North Lees Hall. 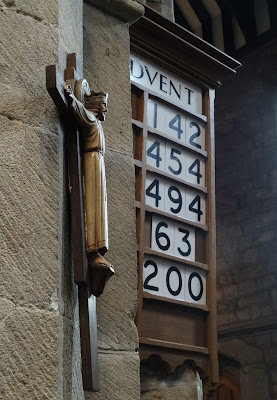 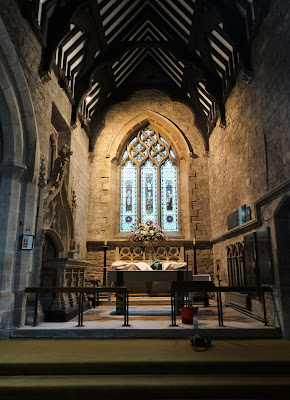 But all of this post is just leading to this fellow:-

It is Robin Hood's trusty lieutenant, Little John. You might think that Nottinghamshire was the chief haunt of Robin Hood and his band of merry men but around this neck of the woods we believe that they mainly operated in South Yorkshire and over the border into Derbyshire. In those long gone days Sherwood Forest was ten times the size is it is today.

And in a corner of Hathersage churchyard you will find Little John's grave under an old yew tree.  It is true that the presence of his remains has not been verified by forensic archaeology but I still like to believe that he lies there dreaming of his past adventures with Robin Hood - stealing from the rich to give to the poor and nobbling the Sheriff of Nottingham's lads with his big stick.

Click to enlarge so you can read the inscription:- 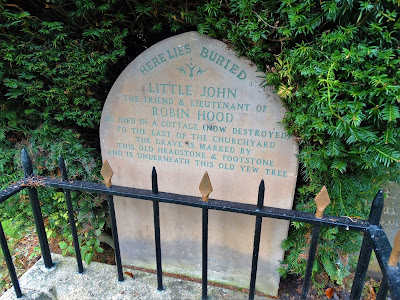