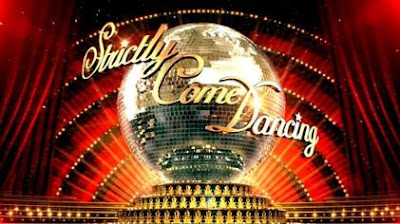 Like 99% of the adult female population of Great Britain, Mrs Pudding is a big fan of the BBC weekend entertainment  phenomenon, "Strictly Come Dancing". It has been running since 2004 and has been a glamorous if fleeting "feel-good" escape from the troubles of the world - both macro and micro. In "Strictly", there are sequins and smiles as each week celebrity contestants battle it out on the dance floor before an enchanted studio audience and a panel of eagle-eyed judges.

This year's contest is coming to a head and the final will happen on December 17th with a new champion dancer crowned.

TV viewers are given the opportunity to apply for tickets so that they can join the studio audience. Every week for the last three years, Mrs Pudding, along with two million others, has applied for a pair of these golden tickets but to no avail. Nothing. Zilch. Nada. Until yesterday that is.

She received her dream message from the BBC. She had been allocated two precious tickets for the final show! But how quickly joy can turn to exasperation. Horror upon horror - we discovered that for each show the BBC gives out eight hundred tickets when only four hundred seats are available! What the...?

On the morning of the show, she will need to join the ticket validation queue at Elstree studios very early in the morning if she is to be one of the lucky four hundred. What an absolute pain and to wit a bloody disgrace! The result of this absurd arrangement is that we will have to stay in a hotel down in Borehamwood on Friday night. All rooms in the nearby "Ibis" had already gone last night so I booked the very last room at the 5.8 rated Elstree Inn so that Mrs Pudding can scoot out at 6am to wait in the queue before the validation office opens at 9am. Even Charlie Bucket didn't have this nonsense.

In the end, it is possible that Mrs Pudding won't even get her pair of tickets but assuming she does, please don't think that I will be sitting beside her in the studio. No. That honour will fall upon our lovely daughter Frances who will take the short train journey north from London later that day.

What a cack-handed way to handle the tickets! I mean, why couldn't they just sort out the validation online instead of treating licence payers and fans like this? Making them get up before dawn, possibly in freezing conditions with rain pelting down on what should be a truly joyous day. One thing's for sure - celebrity members of the "Strictly" audience won't have to do this and they will have the prime seats. If not fuming, I am at least simmering.
😠
- November 30, 2016