On Thursday I enjoyed a ramble in the lee of Millstone Edge to the south of Hathersage. This is not far from Over Owler Tor or Surprise View. It doesn't take long to drive there from our house.

Millstone Edge is fascinating because of the quarrying activity that happened there in the past and the way in which Mother Nature has since reclaimed it, softening and disguising the evidence of stone industries. The very name Millstone Edge speaks of the countless millstones that were hewn and shaped there. Later huge blocks of stone were cut from the edge and transported on a little railway to the head of The Derwent Valley where they were used in the construction of two great dams.

Of course, I snapped several pictures on this ramble under the edge but in this post I am sharing just one of them. It's a photo of a comma butterfly seeking sustenance on a clump of yellow ragwort. The scientific name for this once rare butterfly is polognia c- album. It is easily distinguished by the scalloped appearance of  its wings and on its underside you will find two white marks shaped rather like commas. 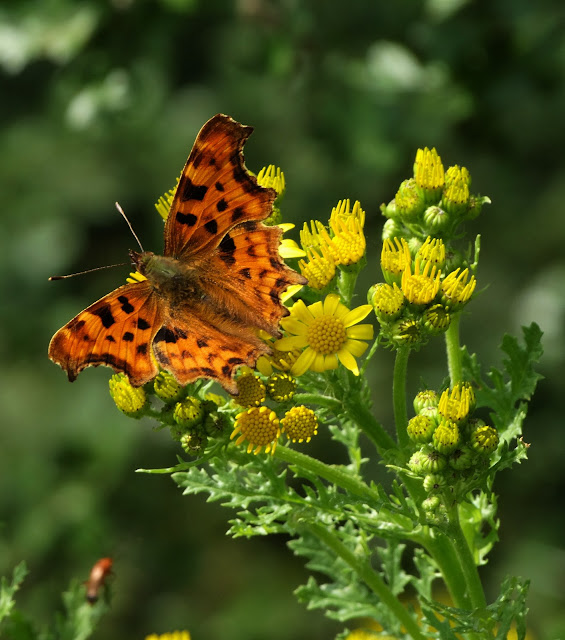 This is what the British Butterfly Conservation Group have to say about the comma:-

"The Comma is a fascinating butterfly. The scalloped edges and cryptic colouring of the wings conceal hibernating adults amongst dead leaves, while the larvae, flecked with brown and white markings, bear close resemblance to bird droppings.

The species has a flexible life cycle, which allows it to capitalize on favourable weather conditions. However, the most remarkable feature of the Comma has been its severe decline in the twentieth century and subsequent comeback. It is now widespread in southern Britain and its range is expanding northwards."

Underside of the comma:- 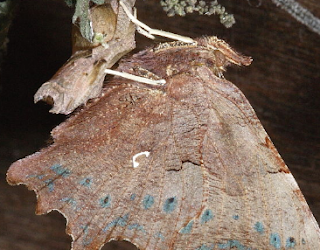