Norma moved into our street when she was four years old. Next month she will be ninety two.

She married a Czech refugee towards the end of World War Two. He was called Pavel. They had just one child - a son who must have been pretty brainy because he became a vet with his own animal practice near Preston in Lancashire.

I often talked with Pavel at his garden gate but in the last few years of his life dementia was taking a hold. In contrast, Norma has always been as sharp as a pin, even as her body was failing her. She had both hips replaced and needed a mobility scooter to get out and about.

She was fiercely independent and it was only in the last year that she needed carers to support her. With Pavel, it was the brain that let him down but with Norma it was the body.

Recently she became so physically weakened that she ended up in hospital. She will never go back to the house where her mother died and where she lived for eighty eight years. After  temporary care in a local residential home she will transfer to a more permanent home in Lancashire - not far from her son's house.

The other day her favourite handyman was clearing out her house ahead of its sale. I asked him if he'd give Norma a "Good Luck" card from me and he agreed so I bought one at the post office and wrote a nice message inside it.

Yesterday I received a return message from Norma who is passing time and getting a little stronger before she moves over the hills to Lancashire. Here's her note:- 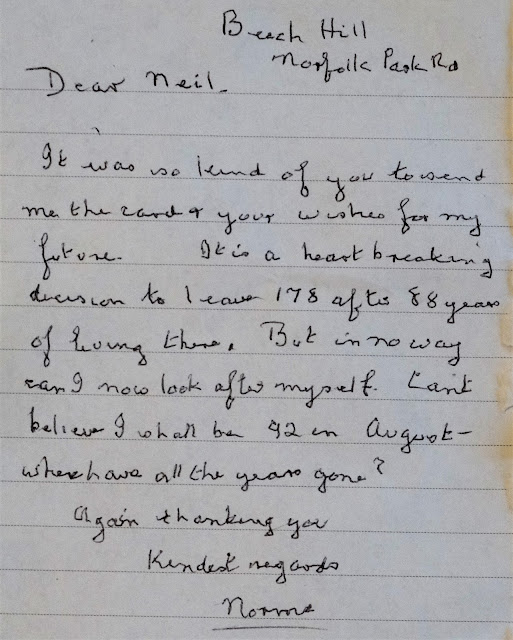 Where indeed have all the years gone? It's not every day that you get a fluent  little letter from a ninety two year old woman. Hell - when she moved in to our street not one family owned a car and the milk was delivered by horse and cart. Nobody had central heating but every house had a coal fire. As Norma leaves us a piece of social history also departs. I am sorry that I have no photographs of her.
- July 20, 2017