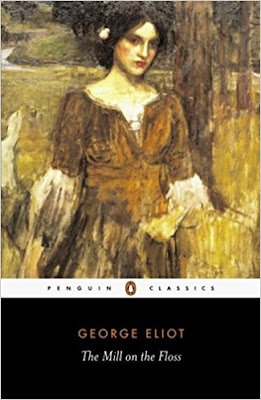 “She thought it was part of the hardship of her life that there was laid upon her the
burthen of larger wants than others seemed to feel – that she had to endure this
wide hopeless yearning for that something, whatever it was, that was greatest
and best on this earth.”  - George Eliot, "The Mill on the Floss"

While in Lanzarote I finished reading "The Mill on the Floss" by George Eliot. Despite achieving an honours degree in English Literature and teaching English for thirty five years, I had never read a novel by George Eliot before. Somehow she passed me by. Yes - she - for the name George Eliot was just a pen name for Mary Ann Evans who was born in Warwickshire in 1819.

"The Mill on the Floss" contains strong autobiographical elements. It focuses on the lives of siblings Tom and Maggie Tulliver. Life presents them with a range of challenges and they battle for respect, happiness and financial security. The novel was first published in 1860.

I like to get lost in a book and there were certainly episodes in this novel where I had that feeling. The ending was especially gripping as Maggie sought to rescue her brother from the mill on the River Floss after it had burst its banks. However there were turgid phases where the narrator stood back from the plot and moralised or reflected upon the characters. I found several of these sections hard work and somewhat self-indulgent though others were fascinating diversions.

Set in Victorian England, the book reveals a great deal about the priorities and manners of middle class Victorians. From a socio-historical viewpoint, it is a mine of information. Life is governed by unwritten moral codes and shared suppositions. It is extremely difficult for the characters to act freely and simply be themselves. They are forever looking over their shoulders and weighing up how their actions will be viewed  by others.

With notes and a lengthy introduction by A.S. Byatt, "The Mill on the Floss" was six hundred pages long. Reading it with full concentration was a challenge but I read every single word. It's another box ticked but for me this work seemed far less accomplished than the best fiction of  Charles Dickens or Thomas Hardy.
- July 12, 2017