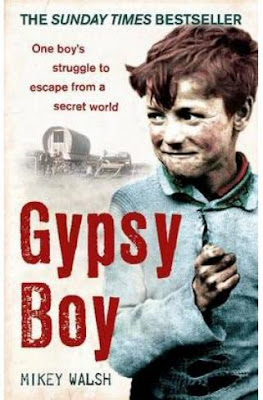 I decided to tell my father everything about Joseph and what he had done. But as I told him, falteringly, about what was happening.his eyes exploded with rage at my gruesome 'lie'. He
began to shout above my pleas,then, not being able to quieten me, he slammed his fist into my mouth, splattering my lips through the gaps of my teeth. He did not want to hear it, and it only made my punishment worse.I knew then that I could never tell anyone. I was utterly alone. (p112)

This short extract is from the middle of "Gypsy Boy" by Mikey Walsh. It is a true story. Here he is eight years old and bewildered by the brutal attentions of his paedophilic Uncle Joseph. But his father Frank Walsh isn't listening. Little Mikey is used to physical punishment, including being hosed down whenever he wets the bed. His father is a fearful bully, unable to accept that his first born son will never be a gypsy prizefighter.

The book reveals some of the inner workings of Romany life. There is brutishness but there is also honour and togetherness. There are long-established moral codes and the "Gorgia" householders they live amongst are viewed with disdain and invariably downright animosity.

Mikey's father makes money by ripping off unsuspecting "Gorgia" pensioners.. He lays tarmac at massively inflated prices and the quality of his work is dreadful. He even steals the tar and grit required. Of course as Mikey grows older he ends up doing all the manual work, frequently receiving cruel beatings when his father is not happy with his work.

Entering puberty, Mikey comes to realise that he is gay which in the Romany world is simply unacceptable. Eventually he runs away to begin a new life but the joyfulness and the terror of his upbringing remains with him.

This was a very easy book to read. There is a lightness about the narration that rarely obliges the reader to ponder despite the sometimes horrific cruelties that Mikey endures. It's all so matter-of -fact. Mikey doesn't come across as embittered or psychologically damaged, he just gets on with the task of telling his story.

When I was a boy, gypsies would pass through our East Yorkshire village every year. We would run to the school gates to watch them with their horses, painted caravans and ragamuffin children. They seemed so exotic, so different - a mysterious race in our midst and I often thought of them. Even though Mikey Walsh was born as recently as 1980, his book nonetheless reveals some of the secrets of that community which persists to this day in spite of everything.
- July 22, 2017