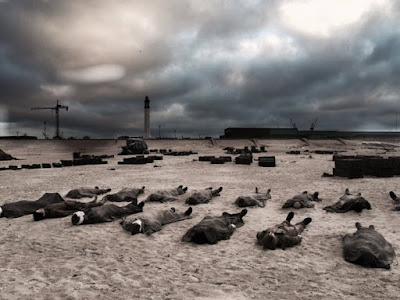 Yesterday morning I caught the number 88 bus into town to watch "Dunkirk" at The Showroom. It had been recommended  by three influential film critics - Mark Kermode of "The Guardian", Derek Faulkner of "The Sheppey Bugle" and John Urquhart Gray of "The Trelawnyd Thunderer".

Now I am not naturally drawn to war films. There have been so many of them but I greatly admired both "Apocalypse Now" and "Saving Private Ryan" so I am not totally averse to the genre.

I sat in the darkness and observed "Dunkirk" directed by Christopher Nolan with an open mind. The first thing I should like to report is that the film is visually stunning. There were so many photogenic moments - the beach at Dunkirk and the dog fights in the sky. Surely no other film has ever conveyed air battles as convincingly as this film did.

Secondly, I would like to report some puzzlement about the state of The English Channel. Sometimes it was calm and blue under a clear sky. At other times it was grey and stormy. I wondered how it could be so changeable within a particular time slot. This was irritating.

Thirdly, I liked the way the film picked out particular strands of experience and wove them together. The terror of the evacuation was portrayed  through three or four main stories, including the progress of "The Moonstone", a civilian rescue vessel  ably skippered by Mr Dawson played by Mark Rylance.

Dialogue was pared down to a minimum. This film was more about physical and visual experience than words. It held my attention throughout and there were moments when my eyes were filled with tears such as when the small ships appeared upon the water to assist in the evacuation of over 300,000 men with "Nimrod" by Edward Elgar  humming in the background.

Yes my friends, "Dunkirk" was certainly worth the watching. And to my shy friend Lee George on Tamborine Mountain in faraway Queensland, I should like to say that her current pop hero and love object - Harry Styles - did a good job as the young private - Alex.

One film critic, David Cox, was brave enough to stick his head above the parapet and admit  that he wasn't greatly enamoured with this film. He said, "Film-makers usually instil interest in their protagonists by giving them backstories and meaningful dialogue, thereby creating characters who can be engaged in drama. In 'Dunkirk', these things don’t happen." To be frank I can see to some extent where Cox was coming from.