Gadzooks! Jumping Jehosaphat! Stone the Crows! A couple of weeks ago, I shared the news that one of my pictures had been selected as the geograph picture of the week. It had been more than a year since I last received that accolade. Now just two weeks later another of my photographs has been named "picture of the week". It was chosen from 4,416 submissions.


The picture was taken from the rocks of Over Owler Tor - looking up The Hope Valley into the evening sunshine. In fact I already shared the picture with you in this post. Here it is again:- 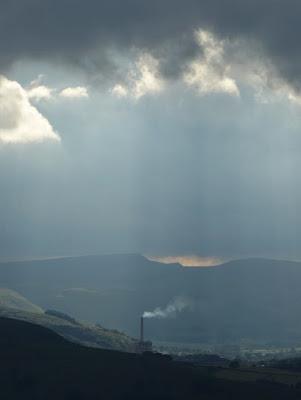 The Hope Valley lies within The Peak District National Park. The chimney is something of an anomaly. It is at Hope Cement Works. Though you can't see it in this picture, to the left of the chimney there is a great hole in the landscape from which millions of tons of limestone have been quarried. It's alright having national parks but we need cement too so I wouldn't protest overmuch about that chimney.

When the next shortlist appears for me to judge I will again share my top five with you to elicit comments and observations. In the interim, it's party time here at Pudding Towers. Wench! Wench! Stop polishing my shoes and bring me another mug of tea ! "Two McVities' ginger nuts would also be appreciated!" - as the actress said to Ed Sheeran.
- July 11, 2017