It sits on the southern tip of the Arabian peninsula. It has a population of some 25 million and it is the poorest county in the Middle East. Its history is long and complicated. A succession of "visitors" left their mark in Yemen - from the Ancient Egyptians to The British Empire. To understand the influences that have made the Yemen of today you would need to be a professor of Yemeni history and even then you would be missing something.

Oh, by the way in the early hours of this morning Saudi Arabian fighter jets  supported by the US military bombed Sanhan and Bani Bahlul districts of Sanaa province reportedly causing heavy damage to citizens' properties. In the ensuing chaos today's death toll is not yet clear. But what's new? Such attacks have been happening for months on an almost daily basis.

It is said that Saudi Arabia's persistent bombings of Yemen are connected with the power struggle between the supporters of  President Abdrabbuh Mansur Hadi and the Houthi rebels who have opposed his governance. SaudiArabia believes that the Houthi rebels are backed by Iran and this is why the USA, along with Britain are quietly supporting the military action.  Only a few days after the "accidental" bombing of a big funeral in Yemen earlier this year the British government approved the sale of £283 million worth of arms and military equipment to Saudi Arabia. 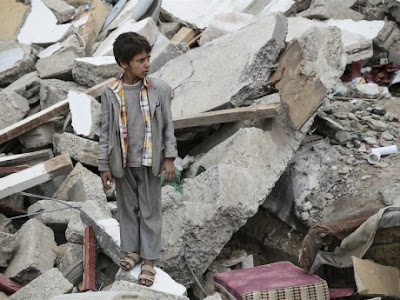 Since Saudi Arabia began their attacks on Yemen in March 2015 more than 8000 civilians have been killed and some 44,000 have been seriously wounded. The country's fragile infrastructure is in ruins with roads, schools, hospitals and bridges destroyed along with power plants and water treatment works. It was hard enough for ordinary people to survive in Yemen before this conflict but now it is a whole lot harder. Meanwhile the United Nations stand idly by.

It is perhaps no surprise that the country is now in the throes of a terrible cholera epidemic. More than 370,000 people have contracted the disease since April of this year and an estimated 1800 have died. A quarter of these have been young children. Thank you Saudi Arabia and your shadowy backers! Great job! By the end of this year the World Health Organisation estimates that 600,000 Yemeni people will have contracted cholera in the world's biggest ever outbreak of the disease.

Instead of dropping bombs perhaps the Saudis and their western allies might consider dropping barrels of clean water instead. But shh! Let's not talk about Yemen. After all, nobody goes there for their holidays and anyway aren't the folk over there mainly Muslim? 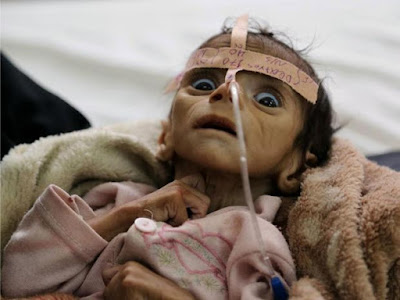