In the past two weeks my walking activity has been greatly curtailed by wet weather. I was like a tiger in his cage pacing up and down, growling at  passers by in their sou'westers and galoshes. You can imagine how relieved I was when I learnt that dry weather and sunshine was predicted for Monday.
I planned a ten mile route in northern Staffordshire. Sensibly, this ramble would include six or seven miles on quiet tarmacked lanes - selected because of the amount of rain that has already fallen this month. I knew that there would be some very muddy paths and fields.

God it was good to be out there on a chilly but sunlit day. Naturally I had my trusty "Sony" bridge camera with me. I saw many wonderful things including a herd of wild roe deer.

By three o'clock the light was already fading. I had just paid a call of nature behind an old stone barn. Rather than retracing my steps, I decided to advance along the adjacent field boundary hoping to spot a way through the fence and then get back on the road. 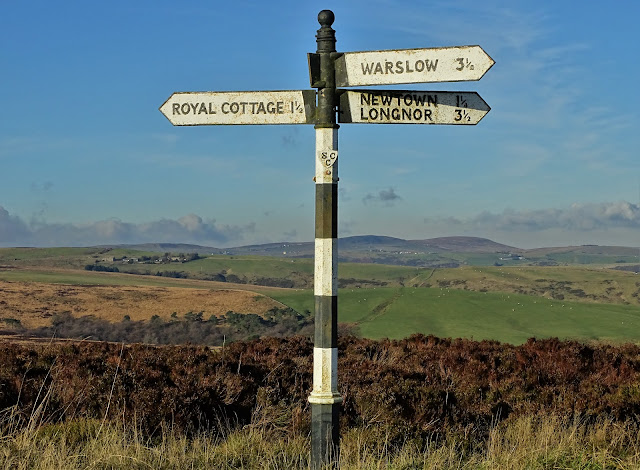 Big mistake. I found myself in a marshy area with large grassy clumps and evidence of churning by cattle. I hopped nimbly from grassy clump to grassy clump hoping to keep my boots dry. And then I lost my footing. Not only were both feet suddenly shin deep in muddy water with the boots inundated but I fell over like a clown. Good job there were no blog commenters watching from the fence. They would have been killing themselves with laughter
Soon after the catastrophe in the cow field , I got through the fence - back onto the quiet country road. Two or three vehicles and a cyclist passed by - probably fearful of The Beast from the Swamp who was walking back to the village of Warslow in setting November sunlight - leaving a  trail of mud behind him.

Fortunately there was a spare pare of socks in Clint's capacious boot (American: trunk).
- November 18, 2019