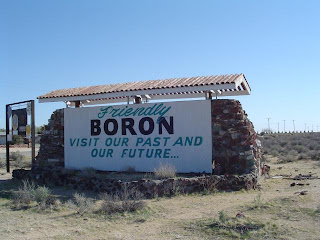 "Boron is in Kern County, California. The population was 2,025 at the 2000 census. In 1990 the population was 2,904.Boron is a community on the western edge of the Mojave Desert. A unique asset of the location is that within a half day drive you can view the highest and lowest points in the contiguous 48 states of the United States (Mount Whitney and Death Valley), the world's oldest tree (the Bristlecone Pine), and the cities of both Los Angeles and the Las Vegas metropolitan area. Boron is home to California's largest open-pit mine, which is also the largest Borax mine in the world."
We drove into Boron at Eastertime 2005 on our way from Las Vegas to Bakersfield. It was a godforsaken place of boarded up homes, a handful of stores and a fantastic diner where we ate a hearty all-American lunch by the empty Twenty Mule Road. On the edge of the Mojave desert and almost treeless you sensed just how hot this place would become in the summertime. It was miles from anywhere - beyond Barstow and far from the fertile central Californian plain which gave Bakersfield its wealth.
I often think of that place. Another America. Not the America of "Baywatch" and "Miami Vice" but the America of open spaces and hard work and anonymity. It only exists because of the mineral Borax which is used in fire retardants, soap, putty and metal processing. I would rather spend a day in Boron than a month in Disneyland or Hollywood... "All gone to look for America" - it was there in Boron. 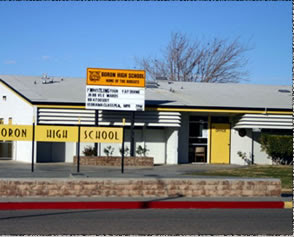 Above - Boron High School and the excellent K&L Corral Diner. Eat your heart out Gordon Ramsey!