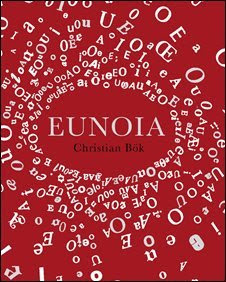 For this post, like Russell Brand and Jonathan Ross, I am largely indebted to the BBC -
Eunoia is the shortest word in English containing all five vowels - and it means "beautiful thinking". It is also the title of Canadian poet Christian Bok's book of fiction in which each chapter uses only one vowel.
Mr Bok believes his book proves that each vowel has its own personality, and demonstrates the flexibility of the English language. The book took seven years to research and write. Below there's an extract from one of Bok's chapters:-
from CHAPTER O - FOR YOKO ONO
Loops on bold fonts now form lots of words for books. Books form cocoons of comfort - tombs to hold bookworms. Profs from Oxford show frosh who do post-docs how to gloss works of Wordsworth. Dons who work for proctors or provosts do not fob off school to work on crosswords, nor do dons go off to dorm rooms to loll on cots. Dons go crosstown to look for bookshops known to stock lots of top-notch goods: cookbooks, workbooks - room on room of how-to-books for jocks (how to jog, how to box), books on pro sports: golf or polo. Old colophons on schoolbooks from schoolrooms sport two sorts of logo: oblong whorls, rococo scrolls - both on worn morocco.
BBC Website readers were asked to devise their own little pieces using only one vowel. Here's just a small selection:-
I think this is gimmicky! Katherine, Arizona, USA
A Lancs man asks "Can that mad, bad, Yank MacCain catch Barack?" Lancs Man says Yanks want Barack? Fab! Mike W, Lancashire
Every sheep relent ! Seven enter where'er three entrench. Ten express envy. Better repent eh ? Very deep.... James Upton, London
Dull. Dull, ugly, uck:Tumult upturns, hurls, bursts, Curbs plush hush, Dull murmur gusts -Humdrum duck clucks thus. Laura Redfern, Conwy, Wales
John won't borrow Bok's book - too bloody wordy! Only O's? Noooooo! John W, Sheffield
CHALLENGE! Can any readers of this blog create their own bits of language using only one vowel? Here's my, admittedly, rather pathetic example:-
Even the defenceless yet excellent Exeter eels "eek" endlessly whenever they bend. Y.Pudding, Sheffield
I heard Christian Bok on Radio 4 today, talking about how the exercise of writing his odd little book had caused him to shelve normal creative channels and instead focus on the whims of language. An unusual notion drawn from his favourite word - eunoia - beautiful thinking. I had never even encountered this word until today.
- October 30, 2008