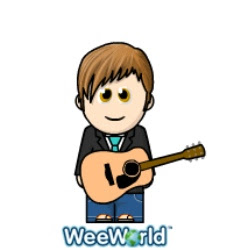 Above. That is "Weeme". I constructed him myself - a sort of mini "avatar". Now in England the word "wee" is not only a synonym for small, it is also an alternative term for urine! Hence small children or "wee" children will often say to their mummies, "Mummy I need a wee!". They wee in their pants and wee in their beds. Small boys wee all over the floor or have weeing competitions with each other as they wee up walls like wee firefighters.
I wish to reassure you that my "WeeMe" has absolutely nothing to do with urine. It's just a cartoon mini version of me. I am playing my guitar in my old supermarket brand blue jeans and my old work suit jacket. I am so good on the guitar that - as you can see from the picture - I don't even need to use my hands! The only thing missing is my Hull City lapel badge.
Look at us flying high in The Premiership! Played eight, won five, drawn two, lost one! However, I rather think that this will be the pinnacle of our season. I am predicting three defeats in a row now - West Bromwich*, Chelsea and Manchester United. Even so the start to this season has been so fantastic that WeeMe could be in danger of weeing himself!
Why not make your own "WeeMe"? Then our little "WeeMes" could have a cyber-party together in WeeWorld! Click on my WeeMe to begin making your own!
*LATER - Hell! I shouldn't have been so pessimistic. We beat West Brom 3-0! And now we sit joint top of The Premiership with Chelsea and Liverpool. Absolutely amazing!
- October 25, 2008