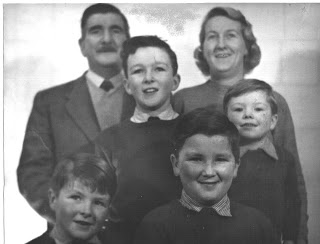 This is an old photo taken, probably in 1961. Before? Before The Beatles. Before computers. Before colour televison and pizzas, punk rock and video recorders. Long, long ago in a time of innocence.

There's Dad at the back. Born in 1914, he trained to be a primaryschool teacher between the wars and then afterwards with Mum - the woman he fell in love with and married in India - he came back to England to be a primary school headmaster from 1951 right through to his retirement in 1978. He died a year later.
And there's mum next to him. Product of a broken home. She grew up in poverty in South Yorkshire but loved to dance and to sing and finally she danced and sang her way into the Women's Royal Air Force, ending up in India as a military secretary and drum major in the airforce marching band. Never in her wildest dreams would she have imagined becoming the wife of a country headmaster in rural East Yorkshire. She died just over a year ago.
The tall boy is Paul - born in 1947. Paul the violinist. Paul the rock climber and choirboy, the biologist and German scholar. Paul who rode through two major relationships and ended up three miles down a lonesome track in western Ireland under an array of stars with Josephine and their two boys.
The big boy at the front is Robin - he of the dyslexia, the tractors, the motorbikes and the cars. He achieved jack all educationally but made up for it by using his native wit and ruthlessness to become successful in business. Export deals took him to Saudi on a regular basis and South America and Egypt. He is the one who lives up a lonesome track with Suzy in southern France, looking out on the Pyrenees.
The little one is Simon who never left East Yorkshire and still lives alone in our mother's house in the village where I was born. His life has not been easy and he currently works as the trusty maintenance man in a Beverley hotel.
And the other one? The one at the front. That's me. In the bosom of my family. Hair just combed. Not realising, even for one moment, that this simple safe loveliness would not last forever. And 1961 would give way to 62 and 62 to 1963 and almost everything would change in the end.
- October 17, 2008