Don't know about you but this world financial crisis is an absolute mystery to me and that's in spite of recently reading "Cityboy" by Geraint Anderson which exposes the excesses of greedy stockbrokers guzzling at the money trough in London's famous square mile - claiming huge and thoroughly undeserved bonuses while ordinary people slog their guts out to make a crust and feed their families. So hideously wrong.

But during this miserable "credit crunch" as we northern hemisphereans sink into winter's dark abyss, we surely need to laugh. I adapted this from a discovery I made when googling "credit crunch":-
How to survive the credit crunch
Millions of people are worrying about how they are going to survive the credit crunch. The answer is simple: become a hippy.
1. Smoke Pot - unlike alcohol there is no VAT on illegal drugs so you save money straight away. As cannabis is far safer than alcohol you also save on the cost of liver transplants in the future, so smoking pot is a sound investment for your old age. You could also consider becoming a weed dealer and/or grower which will help rebuild your nation's 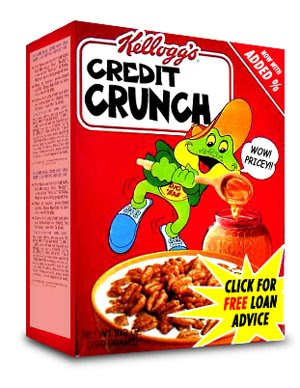 shattered economy.
2. Don't cut your hair, cut your costs - having long hair saves money and is warmer in winter. People with long hair save fuel costs, cut national dependence on foreign fuel, and cut CO2 emissions which could save humanity from extinction.
3. Don't shave - razor blades, shaving cream and other fetish body hair removers such as leg waxing kits etc are all products of the decadent 'throw away' consumer society which is destroying the rain forest and your credit rating. Nature gave us hair for a reason. Don't help Boots survive the credit crunch, help yourself and become a hairy hippie.
4. Squat now while stocks last - if you have a mortgage you can't pay don't worry about foreclosure. In fact the more foreclosures the better as this increases the housing stock available for squatting - now you can live mortgage free and rent free!
5. Become a pseudo 'veggie' or 'virtual vegan' - don't worry, most veggies cheat so you can eat fish and meat when ever you want, but eating veggie can dramatically cut your food costs. For example Tescos are doing a can of red kidney beans for 18 pence, while a pack of King Prawns costs at least £3.00. One meat meal requires 10 meals worth of grain to produce. Meat production creates 18% of world Co2 emissions while air travel contributes just 3%. This means 'veggie' hippies can still fly Ryan Air and save the planet! It is Plain Obvious.
6. Dress down (and out) - even if you have a family trust fund, looking poor is the safest option in these dangerous knife crime times, plus it will save you a fortune. Even Madonna shops at Oxfam, thats why she is so rich. If you are really broke raid the clothing recycling bins; don't feel guilty - just remember that we are all Africans now. Alternatively you could become a nudist and cut your clothing bill completely.
7. Start or join a commune - council tax is chargeable per household so if you have twenty people in your commune the cost saving per person or couple is dramatic. With communal meals, shared sleeping areas and a washing up rota you can save even more and might only have to do the washing up once every two weeks!
8. Love is all you need - the new economy should not be based on shares but on sharing. For those with high sexual drives there is also the increased chance of attending more orgies, especially if you are bisexual.
9. Give Peace a chance - it is totally unrealistic of course, but supporting hippie pacifist defence policies could save billions for national economies. If the whole world went hippie the only defence we would need to think about would be against violent anti hippie skinheads, Tory counter revolutionaries, or a 'UFO' invasion from outer space.
10. Go to India - you might be able to get a job in a call centre.
- October 01, 2008