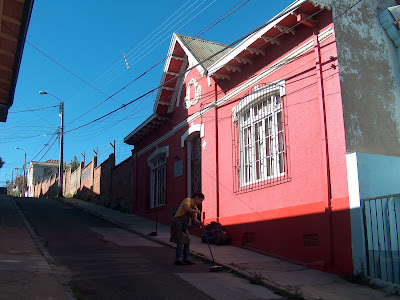 The "Hostal" where I stayed in Vina del Mar
Vina - pronounced Vinya is really Vina del Mar, the port of Valparaiso´s sister city. It isn´t a quaint little fishing village. It´s Chile´s number one coastal resort with some high rise apartment blocks and a "buzz" of activity - people coming and people going, laughing, eating, shouting, begging.
This is in marked contrast with the little working town of Los Andes where I stayed last night. I woke this morning and walked up to the Cerro del Virgen - a hill overlooking the town. It was hot and dusty but I was glad to get close up to examples of the ten foot cacti I had seen from the bus back from Argentina.
At the top of the hill was of course a white statue of the Virgin Mary watching over her people. But I spotted a couple of lesbians making out in the trees below. They had brought a blanket and a picnic and probably didn´t realise that anybody could see them. I notice a lot of public kissing and canoodling here in South America. Maybe it is true what they say about Latin lovers.

Down from the hill, wishing the lesbians good day, I ended up at the archaeological museum which had some commentary in English and I was the sole visitor. There were some pieces from Easter Island and the commentary reminded me that one of its other names is "Te Pito o Te Henua" which means "the navel of the world". Chile seems so obviously proud of its South Pacific "territory". Bur probably the best exhibit at the museum was a two thousand year old mummy from the Atacama region - she had died in childbirth and her mummified child was with her. The quality of preservation was amazing.

Between Los Andes and Vina there is some lovely. lush agricultural land - a lot of it given over to big scale viniculture - rows and rows of vines, neatly arranged to aid watering and harvest.

I had a light meal tonight - salmon and salad with a small bottle of local wine and then in the same little restaurant I watched the first half of Chile versus Paraguay in a pre-World Cup warm up match. It was still 0-0 when I left.

Tomorrow I will be "doing" Valparaiso - the funicular railways and the little colourful streets. The street I am on is itself very steep. It´s a basic but friendly hostel with only eleven bedrooms. Mine is supposed to be "en suite" but the bathroom is across the little corridor and I haven´t brought my dressing gown. The owner´s daughter had to show me how to fire up the boiler - no salacious pun intended!
- November 05, 2009