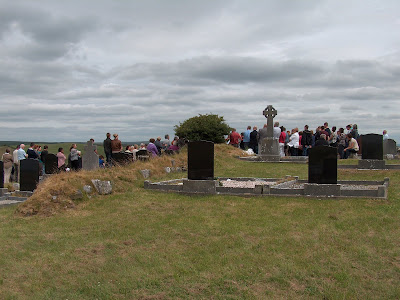 We buried him in an isolated rural cemetery that is known locally as "The Island" - probably because that little hummock of a hill was once surrounded by swampy ground. As is the tradition, only male family members carried the coffin. Feeling his weight on my right shoulder was a wonderful discomfort.
He had known each of the gravediggers. They had prepared a hole some five feet deep, snug against the limestone boundary wall with a huge pile of Clare soil beside it in what has been one of western Ireland's driest years.
Ned Crosby, the priest, who also knew Paul personally, said the customary religious words by the grave. And then everybody applauded my dead brother. By the stunted hawthorn bush where an ancient chapel once stood, musicians played familiar tunes on fiddles, concertinas and pipes with Paul's daughter, Katie, accompanying on her wooden flute.
All was quiet and then an old friend called Michael stood on a rock with his chin raised slightly to the sky and with great passion recited in Irish Gaelic a famous poem called "Pearse's Lament". Roughly translated, it begins:-
Grief on the death, it has blackened my heart:
lt has snatched my love and left me desolate,
Without friend or companion under the roof of my house
But this sorrow in the midst of me, and I keening.
As I walked the mountain in the evening
The birds spoke to me sorrowfully,
The sweet snipe spoke and the voiceful curlew
Relating to me that my darling was dead.

At the end Michael wove in some few Spanish words which connected Ireland's freedom struggle with the battles of Spanish republicans before the second world war - "Viva la quinta brigada! No passaran! Adelante!"

People began to drift away. Some stood amongst the graves exchanging thoughts about Paul. I took a handful of earth from the pile and threw it on top of his coffin. Soon the gravediggers removed the flowers and began their timeless task, quietly filling in the hole where Paul will rest forever - well not really Paul but his human remains - that same wax model I reflected on in "Hands".

It was the best of days and the worst of days. Has there ever been a more beautiful funeral? I doubt it. I was filled with pride for my lost brother who was so loved by the people of Clare - the old and the young, rich and poor, intellectual and moronic, pub landlords and priests. Although he was only sixty two, he lived his life to the full with such goodness in his soul. By far, I am not the only one who will never forget him. 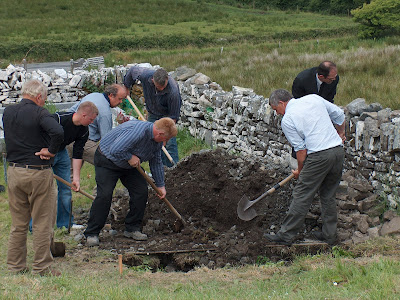