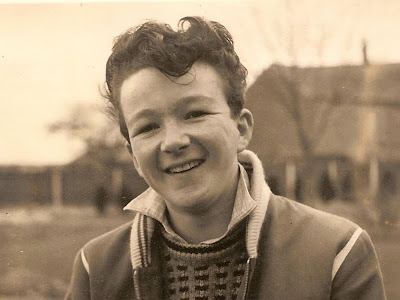 Paul at fifteen
Our upstairs phone has been out of action for a while so when someone rang at seven thirty last Monday morning, I knew I'd not have time to get downstairs before the caller was passed to the 1571 answer-phone service. We thought it would probably be Shirley's workplace asking her to come in early - but it wasn't - it was Josephine asking us to phone her. I knew immediately that something was wrong and the best that we could hope for was that Paul had had a heart attack before being taken to hospital.
When I finally got through, it was to Michael - Paul's oldest son and the last person to speak to him. He told me that his father was dead.
Has a week really passed by since then? In some ways it all seems like a horrible dream and in other ways it feels as if we have simply been actors in a film drama - various scenes, lines we had remembered so well that they just sprung from our lips.
On the morning of the burial, a moth of the night-time fluttered to Paul and Josephine's sunlit doorway before clinging to the stonework. Though a keen observer of Nature, Josephine had never seen such a moth before. She asked me to photograph it and I later discovered it was a "Light Emerald" - emerald for The Emerald Isle. Did it mean something? I don't know but all who saw it were left wondering. 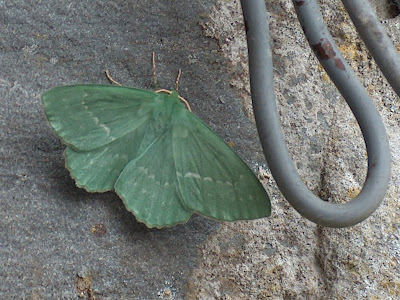 I stood at the lectern in Kilfenora Catholic Church - packed to overflowing - and read from Paul's Letter to the Romans 12:9 - "Let love be without hypocrisy. Abhor that which is evil..." I read it without faltering in my clear Yorkshire brogue, aware that through my voice I was reminding the congregation that our Paul - not Paul the Apostle - was born a Yorkshireman even though he had given his heart to Ireland.
Forgive me if it seems that this blog is threatening to transmogrify into Paul's tribute blog. Please be patient. Before too long, I'm sure I will return to my usual blogging pattern - i.e. no pattern at all! And besides, I know for sure what Paul would be saying to me right now - Don't be so maudlin ye daft bugger - stop wallowing in sorrow, fill yer pot and get on with the rest of yer life! 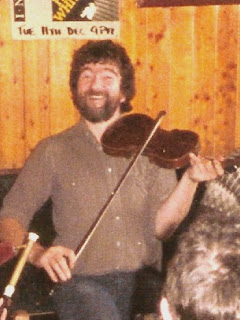