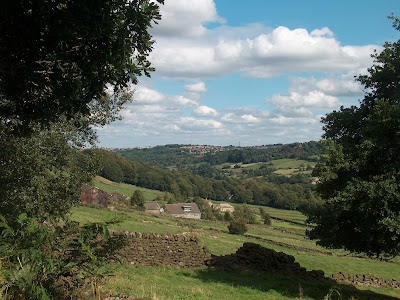 The Rivelin Valley on the outskirts of Sheffield (Click to enlarge)
Last Sunday, I took a constitutional walk in the Rivelin Valley. Just a stone's throw from the city proper, it is characterised by ancient dry stone walls, old country properties of various dimensions, meadows and green pastures. Tumbling along the bottom of the valley and guarded by woods is the Rivelin stream itself. Once this sweet little river powered at least eight watermills en route to the larger River Don which it meets and enlarges at Hillsborough. Today the evidence of those mills has been cunningly disguised by Mother Nature who has a rare talent for healing the wounds that industry invariably leaves behind.
West of Sheffield there are many paths - public rights of way. Some are well-trodden but others retain an air of secrecy and you will often find stiles hidden by summer vegetation with no sign that anybody has climbed them for months. I guess some walkers will imagine that our country paths have been devised for city strollers with rucksacks, flasks and Gortex boots but this network of footpaths is in reality a legacy of past times when country people in a pre-motor vehicle era had to get from a to b - usually for a purpose - delivering eggs, going to church, visiting friends or sweethearts, driving sheep or pigs, paying bills, buying manure or hay. There was much more purposeful walking in past centuries.
On Sunday, I came across one of these secret paths and as I scrambled over the be-nettled millstone steps that led through a small fallow field, I noticed such an abundance of brambles in briary tangles that I made a mental note to return and pick a container full for jam-making and crumbles. Sadly, the weather this week has been rather unsettled so it wasn't until I got up today that I felt confident the late morning would be summery and rainfree.
For almost two hours I picked but I was well-prepared with garden gloves, secaturs and suitable clothing to get right in amongst the thorny runners and nettles. Nobody passed by apart from one solitary walker whom I startled as he emerged from the bushes at the bottom, no doubt lost in his own thoughts and not expecting to see a soul.
Eventually, I tottered up the grassy slope, with a bramble-brimming Tupperware cake container to the dead-end lane where I had earlier parked my trusty Astra. It had been a lovely late summer morning with butterflies and swallows in the air. No sign of the rabbits I saw on Sunday with their debilitating eye infections that reminded me of mixamatosis. Perhaps it was that. They had loitered a couple of yards along the path chewing leaves, clearly unaware of my size elevens plodding along. Maybe, mercifully, I should have killed them.
Back home I weighed my booty. Ten and a half pounds of juicy black brambles. Co-incidentally that was my birth weight though I should point out that I am of course not a bramble... I'm a banana! 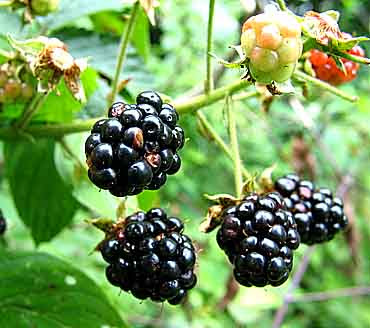