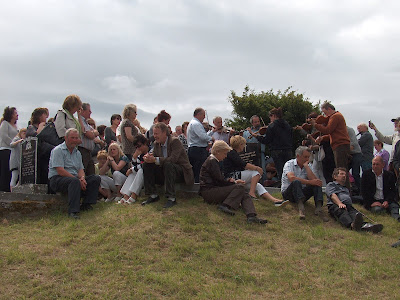 A Gathering
We were all there
Me and Shirley
Michael Neylon and Mick
Kay Vaughan from the pub with her hazelwood stick
Anthony Howley who secured the plot
And that fiddler from Doolin
Whose name I forgot
Derek and Gloria, Mary and John
The barman from Nagles - the miserable one.
And Aidan Malone - a smashing young lad
His mother Breda and Patrick his dad
Simon and Frances and the crowd from Lahinch
Donal, Young Connor and Margaret Lynch
A couple from Belfast who drove through the night
And old friends from Dublin who set off at first light
Kevin stone-faced in black suit and tie
Michael dressed likewise, too shocked to cry
Jo was wept out
Her face numbed by grief
The pain unassuaged
By religious belief
Father Ned Crosby led the applause
And the ceilidh band played
(Kilfenora of course)
Katie's fingers danced on her flute
With six fiddlers' bowing and we listeners mute
Clustering round that old hawthorn tree
Bent east by storms formed far out at sea
We were all there
Young and old
The people you knew
Yes, all were gathered
But where pray were you? 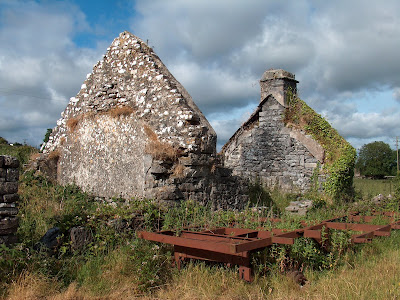 Ruined cottage in Kilfenora
Footnote: I wrote this on what would have been Paul's sixty third birthday - in place of the cards I sent each year.
- August 06, 2010