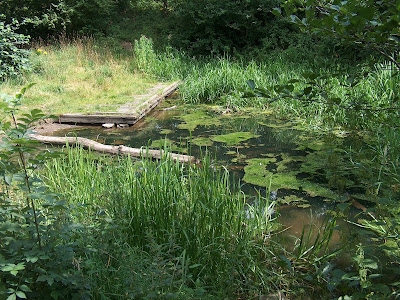 Pond in Lees Hall Wood
This past year I have made several forays into what you might call darkest Sheffield. I love to walk when the weather is good. There's so much to behold if you just keep your eyes open - even in a big sprawling northern city like this one.
Here's a fact about Sheffield. It can boast more parkland than any other city in Britain apart from London which is of course sixteen times bigger than the Steel City.
Today I was exploring Gleadless Valley. I parked up and set off with a rudimentary map I had culled from the Ordnance Survey website. I walked for nigh on two hours without crossing a road and this was well within the city boundaries with high rise flats and council estates close by. Up until the mid sixties there was a farm here - a remnant of earlier times with farm tracks and a big stone farmhouse. Now you'd have to be an archaeologist to read the landscape properly but I found stone gateposts in the woods and a pond, close to the remains of what was once the farm's orchard.
The surrounding area tends towards poverty in terms of family income and much of the housing belongs to the local authority. Sheffield is a very divided city in socio-economic terms and Gleadless Valley is like a reservation for the "have nots".
Along the path came a tattooed couple with four kids in tow. Inappropriately for such a ramble, I noticed the mother was wearing high heels. How sweet - I thought - a working class family out for a nature walk. "Ey up bud!" grinned the young father as I passed him. Moments before, his six or seven year old son had emerged excitedly from the nearby brook with a baby frog in his palm. The mother said "Put it back Ethan!"
Ethan was clearly reluctant to obey. Perhaps this was the very first time he had ever held a frog. After I had passed, climbing up the banking to the unexpected wild open space beyond, I heard the young father's anger increasing till he was yelling - "I've telled thee Ethan! Put the f***ing frog back!" I thought - hey if that had been me - I'd like to think I'd have said something like "Look at the colours on his back. Aren't they wonderful? His mum and dad are probably waiting for him Ethan . Let me help you to put him back in the brook. Now where did you find him? Good boy!" Though of course we'd never have picked a stupid name like Ethan. Poor lad.
Later I drove into Sheffield's true "heart of darkness" - The Manor - which in comparison makes Gleadless look like Beverly Hills. As I may have said before - once this was a vast forested deer park with a lodge in the middle where Mary Queen of Scots was imprisoned for fourteen years. How bizarre that in the twentieth century it became a sprawling low-cost housing estate with burnt out cars, teenage mums and poverty hanging in the air like a veritable fug of cigarette smoke. In the late seventies/early eighties I would sometimes drive through The Manor on a Monday morning and see a line of welfare claimants already queuing for their dues outside the now derelict post office. 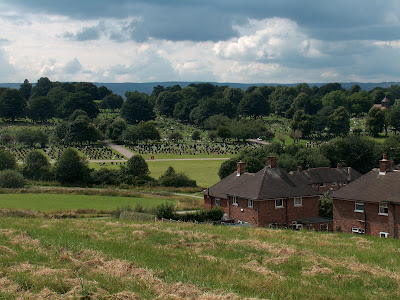